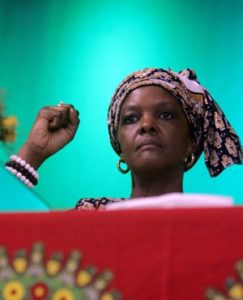 Mnangagwa said: “No. We have not given anybody any immunity. What I promised to my former president and the founding father of our nation, President Mugabe, is that first we give him a package — a very lucrative package.”

The interviewer sought confirmation that the package amounted to $10 million, to which President Mnangagwa retorted: “There is no figure, but it is a question of him continuing to enjoy his salary, his allowances as before, offices, security and travel by first class. My Government will also facilitate him going to Singapore for medical check-up. All those things including the First Lady. We are going to do that.” President Mnangagwa clarified the position on the immunity from prosecution for the former First Lady.

“So we are not saying anybody commits a crime then the former status will stop the police dealing with that issue, but I am saying that the new administration will do everything possible to make sure the family lives in peace, undisturbed. This is what I want,” said President Mnangagwa. He said his administration adopted a zero tolerance to corruption.

“My approach is zero tolerance to any corruption,” he said. “No sacred cow in dealing with that. If you are following what is happening in Zimbabwe today, so many high profile persons have been brought before the courts and this is only in less than two months . . . and the list is unending.”

A number of former Cabinet Ministers have since appeared in court to answer corruption charges, with the new administration determined to once and for all arrest the cancer that had afflicted Government and society at large. Former Ministers who have so far appeared in court include Ignatius Chombo, Walter Mzembi, Walter Chidhakwa and Samuel Undenge.

Their cases are still before the courts. Others skipped the border the moment the Zimbabwe Defence Forces launched Operation Restore Legacy in November last year. The operation targeted criminals that were taking advantage of the then President, Robert Mugabe, to engage in activities that pushed the country to the edge of political, economic and social turmoil. Some of the ministers now living in self-imposed exile are Jonathan Moyo, Saviour Kasukuwere and Patrick Zhuwao.  – state media