He can’t be held responsible

President Emerson Mnangagwa has absolved himself as an individual from the Gukurahundi atrocities claiming that the late former Vice President Joshua Nkomo and former President Robert Mugabe dealt with the issue during their unity government and closed it off. 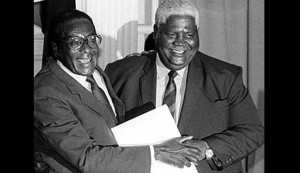 Speaking in a wide ranging interview with private media journalists during the week, Mnangagwa said that Nkomo and Mugabe agreed that the atrocities were a moment of madness and absolved everyone involved from further individual reprimand.

Mnangagwa said this when he was asked if he was considering making an individual apology on the matter.

“Not as an individual,” he said.

“Though the incidents, the commission or omission of that period by the government of the day, of that period, both are to the former vice-president, Joshua Nkomo, and the former president, Mugabe, they have pronounced themselves on behalf of the administration of the day, that it was a moment of madness. And as a result of that position we all came together, all sides came together, and agreed on the Unity Accord, and put this thing behind us,” said Mnangagwa.

He indicated that he is not in a position to engage on the Gukurahundi further than what Nkomo and Mugabe agreed on.

“Any individual complaints or need for assistance can be treated that way (a concluded matter.) he said.

Mnangagwa said that his government has passed a Truth and Reconciliation Act which will govern anyone who still has complaints on Gukurahundi.

“We have passed the bill called the National Healing and Reconciliation Bill, that’s passed, I signed it into law. That will be a platform where these complaints or challenges can be addressed,” he said.

Mnangagwa said that the Gukurahundi atrocities are things of the past and Zimbabweans must start forgetting about them and move on.

“So, but overall we don’t want to live in the past. We can never go back to the past. We need, from the past we must carry on what is good. But never what is bad. We must promote that which is good and go into the future expounding on love, unity, hard work. That’s what we need now,” said Mnangagwa.

This is what I’m saying. From the past we must take the good that the past has in our history. And leave behind that which is bad. We don’t want that to be repeated, ever, this is what I am saying. You follow?”