Some MDC-T youths who were involved in skirmishes with cell phone dealers in the CBD last night that also led to the destruction of the party’s Harvest house building have exonerated Zanu PF from the attacks. 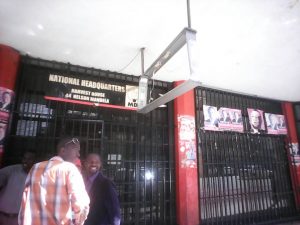 ZimEye.com Wednesday morning visited Harvest house and talked to some of the youths who partook in the skirmishes.

“To be honest we did not see anyone wearing a Zanu PF T-shirt, but we had some serious fights with certain people who were accusing us of stealing cell-phones,” said one of the youths.

“I cannot say they were Zanu PF or they were not but what I can say is this is not the first time this has happened. Recently were raided by these people, they searched us and said they wanted to recover some stolen phones from us. This is what they did last night and we resisted to be searched,” said another youth who was being interrogated by MDC security details.

“We did not know how they ended up attacking our head office because the skirmishes started near 1st street Econet shop,” another MDC-T activist said.

“We rushed to seek refuge at the Harvest house and these people kept on following and throwing stones at us,” another one confessed to the party’s security.

“Armed Zanu-PF thugs led by a certain Gomwe attacked Harvest house this evening and destroyed a lot equipment and furniture. Our youths tried to resist but retreated when gun shots were fired. Mugabe never sent youths to attack us,” Hwende posted on his twitter handle.