An official in the Joice Mujuru led National People’s Party(NPP) has sensationally claimed that President Emmerson Mnangagwa is a ceremonial leader and equated him to Bishop Abel Muzorewa. 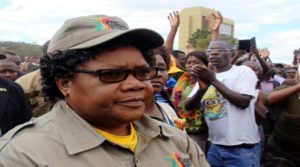 NPP Spokesperson Jeffryson Chitando told party supporters at a rally in Masvingo Central Constituency at the weekend NPP was ready for the elections.

Chitando made the remarks while addressing thousands of party supporters at Gunikuni, ward 22 in Masvingo Central Constituency.

Chitando said Muzorewa was placed in office as a ceremonial Prime Minister while Ian Smith was in total control of political affairs.

“Mnangagwa is the President but the people who are in control of this government are retired army generals.

Mnangagwa is being used to authenticate an illegitimate system,” said Chitando.

” Mnangagwa’s Lacoste faction will not even get 20% of the seats if elections are held in a free, fair and credible manner,” said Chitando

Chitando also indicated that Mnangagwa’s biggest problem was to fight the economic crisis in the country.