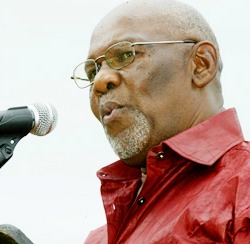 He was speaking at a SAPES Trust’s review on the Gukurahundi massacre yesterday afternoon covered LIVE by ZimEye.com.

Narrating the whole gukurahundi episode Dabengwa said Mnangagwa who was the security minister at time fabricated a case load of allegations against ZAPU officials and collaborated with the then South Africa regime creating a fake army that would then be deployed in Matebeleland to kill civilians rather than soldiers.

Said Dabengwa, “…Mnangagwa our current President was then minister responsible for state security and he (Mnangagwa) did say that, ‘when we got all these facts about arms caches, we then knitted a case against ZAPU and ZIPRA”’

Dabengwa said the deployment of the notorious 5th brigade in Matebeleland on the pretext of hunting for dissidents was an excuse to create a one party state.

“They did not want an opposition. Hence all the ZAPU officials that were being pointed out became victims of Gukurahundi… A number of other people perished under the guise of dealing with dissidents.”

Mnangagwa worked with the South African regime creating an armed grouping they coined super ZAPU that was trained in South and then dispatched back to Zimbabwe to carry out massacres in Matebeleland and banditry activity.

‘South Africa who the security were collaborating with here, the CIO in particular led by Mnangagwa, were in touch with the SA intelligence and together they created super ZAPU..and recruited some of frustrated guys from amongst ZIPRA guys…and said ‘we were going to train you and send you in the country. They were sent under that guise and created. Whilst gukurahundi was doing one thing, they were doing their own and even killing our people, ZAPU people.’

He also spoke about the forming of the Fifth Brigade which he claimed was formed to suppress just 50 ZIPRA soldiers who had deserted the force to go into the bush. He said the forming of an entire brigade to deal with just 50 people was disproportionate and he suggested that the entire army unit was more meant to annihilate civilians than deal with deserting soldiers.

“You must know on what basis it was formed,” said Dabengwa.

He continued saying, “yes it is now water under the bridge we need to resolve this matter as Zimbabweans. Sipho has said there are still some obstacles, one obstacle he has mentioned was the legislation to deal with the Peace and Reconciliaiton the Act has since been gazetted and that is a good positive step I think. Next thing, we need the Chairman of the Commission to be appointed as quickly as possible in order for the Chairman to go into these issues….

Later on, a man speaking from crowd stood up to state the following, “I do not believe that Gukurahundi today is over because there are aspects of it that government is not acknowledging…”

Called to the mic once again, Dabengwa spoke further saying, “the capture of weapons, was it not a conspiracy?  …. I say it was a conspiracy…

“…if there is no acknowledgement by government of all these issues, and no apology given, what do we do? That’s the next stage….”