In these uncertain days people can be cheered up by the familiar. So it’s good to have both Jonathan Moyo and George Charamba to divert us from our worries. They are, of course, not new to the entertainment game, both being hoary practitioners of invention and deceit. But their latest imaginings take some beating . . . 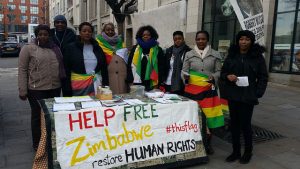 Former Minister Moyo’s HARDtalk interview with the BBC in which he described how angels enabled his flight from Mnangagwa’s killers was – as you would expect from such a narcissist – portrayed as an heroic escape, though he abandoned his family to their fate.

Moyo said Zimbabwe was now a banana republic because of the military coup, which he described as unconstitutional – as if Zanu PF’s actions had all been constitutional and legal, forgetting that it is now 5 years since the constitution was adopted but that it still has to be put fully into effect.

The truth is, if you control the judiciary in Zimbabwe the law is simply what you say it is. Moyo, the supreme charlatan, knows this full well. A serial turncoat, this time he backed the wrong horse – or nag in this case.

Interestingly, Moyo is not letting anyone know where he is now located but took pains to say how he left the country legally – a point of interest only to someone who knows he can be arrested for fraud in Kenya or South Africa as well as Zimbabwe and perhaps other places.

Soon to be former ‘Dr’ Grace may find similar difficulties if she visits any of her old haunts in South Africa, the United Arab Emirates or the Far East, where she could be taken to court for fraud and assault.

For his part, George Charamba – late of the Mugabe camp – now pops up as the spokesman of the new regime. He laughed at Moyo’s claim that Mnangagwa’s visit to Tsvangirai was because he was afraid of losing the upcoming elections and wanted them to be delayed.

But his most interesting observation came in a radio interview he gave in which he said Grace had told him that she had dreamt about him. She said ‘it was on my birthday and you were serving me very green fruit’. She would have been better off with a ripe banana (see: https://www.pazimbabwe.com/politics-44315-grace-mugabe-s-strange-george-charamba-dream-he-gave-me-very-green-fruit.html).

For latest Vigil pictures check: h9ttp://www.flickr.com/photos/zimbabwevigil/. Please note: Vigil photos can only be downloaded from our Flickr website. The facebook page for our sister organisation Restoration of Human Rights in Zimbabwe (ROHR) (https://www.facebook.com/ROHR-Zimbabwe-Restoration-of-Human-Rights-301811392835) has been hijacked by destructive elements from a group calling itself ZHRO. Please be advised that any postings on this page are not posted by ROHR.