Zimbabwe’s Information Communication Technology (ICT) Minister, Supa Mandiwanzira has been named in an investigation for corruption by the Zimbabwe Anti-Corruption Commission (ZACC). 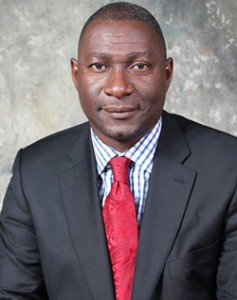 Allegations against him are for handpicking a Chinese firm to investigate Huawei. Mandiwanzira allegedly instructed NetOne to pay the company $4 million.

According to a letter written by Prosecutor General Ray Goba to the ZACC chairperson Mr Job Whabira, Mandiwanzira, who is a Grace Mugabe relative, is being investigated for criminal abuse of office or corruption following allegations levelled by former NetOne Ceo Reward Kangai.

Documents submitted by Kangai show that Mandiwanzira is a director in Blue Nightingale Trading which has links with Megawatt Energy which the Minister allegedly tasked to carry out an audit into a NetOne deal without going to tender. The letter by Goba is below: 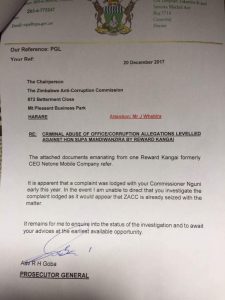