Vendors have given government a 48-hour ultimatum to create jobs for them so that they are able to leave the streets. 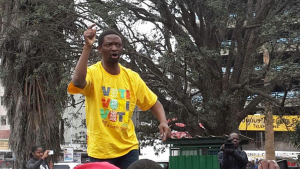 The ultimatum comes barely a day after government also gave the vendors the same order to leave the streets or face military action.

In the announcement which ZimEye covered yesterday, it was revealed that the government has neglected the vendors by as claimed, ignoring their plan, already to submitted, to decongest the CBD.

The association of the street vendors was yesterday busy mobilising its members to launch a counter offensive to government’s threats of military force against them.

The vendors said they were angered by the pronouncement by Local Government minister July Moyo that government would use the military to eject them from the streets and vowed to resist whatever force government would employ.

Outspoken National Vendors Union of Zimbabwe leader Sten Zvorwadza said vendors were in the streets not by choice and would only leave the streets if government provided them with the jobs it promised.

“The attempt by the government to deploy security forces to fight unarmed street vendors is not only reckless, but is tantamount to planting genocide against the needy and the poor,” Zvorwadza said.

“What government needs to understand is that they created the so-called illegal traders and for the government to act brutally would be unfair”.

Zvorwadza said the government was talking about turning around the economy but was chasing the vendors from the streets when they had been the bedrock of the economy.

He said vendors should be given a 100-day plan to work on their future instead of being given a 48-hour ultimatum by the same people who had created them.

“We are disturbed the government makes such an announcement without consulting the traders who are affected,” he said. “If this government is a military state, it is prudent for the government to make it clear so that Zimbabweans can run away for dear life.

“The pronouncement by government to declare war on informal traders who are sustaining this economy is not democratic,” Zvorwadza said.
President Emmerson Mnangagwa has promised to create jobs through resuscitation of industry, but the economic situation remains dire more than 50 days after he assumed office with a myriad of promises.

Zvorwadza said if the new government provided them with jobs, they would gladly leave the streets.

“So we are also giving them a 48-hour ultimatum; our jobs in 48 hours and we forget about all this and focus on our new jobs,” he said.

Leader of the Vendors Initiative for Social Economic Transformation Samuel Wadzai said they would not move and were quite ready to stand up for their rights.

“Is it really necessary to use force? But let it be known we are going to resist if indeed they go through with it,” Wadzai said.

He also said they would meet with the mayor Bernard Manyenyeni, who they allege to have distanced himself from the announcement. – Standard/ZimEye