The Zimbabwean is watching numbers grow on a Petition that pleads with Zimbabwe to stop capturing elephants for sale to zoos. 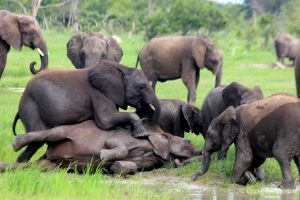 “I wish that Zimbabwean officials had spent more dedicated time with me in the field in Hwange, learning about and witnessing the extremely close family bonds that elephants have,” says Sharon Pincott who spent over a decade in Hwange with elephant conservation efforts, in particular monitoring the social structure and population dynamics of the Presidential Elephants of Zimbabwe. “Elephants are such intelligent, sentient beings. The negative impact of ripping young ones from their mothers and families can’t be overstated,” she says.

“Francis Nhema was the wildlife Minister for much of my time with elephants in Zimbabwe. He has spoken publicly in the past about the ‘rude awakening’ he got, while spending time with me in the company of elephants during the 2011 filming of the All the President’s Elephants award-winning international documentary. At that time, Minister Nhema was recorded saying the he ‘met families who are probably more organised than human beings… families that show love, respect – probably better than human beings… families who live according to protocol; to respect’.”

A Care2 (“You care; we care too”) petition in opposition to the ongoing elephant captures in Zimbabwe has attracted over 260,000 signatures from around Zimbabwe, Africa and the World.

“The petition will be closed off on Monday, 22 January 2018. Relevant documents will then be generated and delivered to President Mnangagwa, Minister Muchinguri in the Environment Ministry and Mr Mangwanya in ZimParks, in the hope that they will now jointly better appreciate just how much damage this practice is doing to elephant families, and to Zimbabwe’s Tourism sector. We ask that they review Zimbabwe’s capture policy with urgency.”

Pincott has taken on the task of ensuring delivery of this petition to the Zimbabwe authorities, and this will happen before the end of this month. You can find the petition at https://www.thepetitionsite.com/115/823/953/zimbabwe-stop-capturing-wild-elephants-and-exporting-them-to-chinese-zoos/

“Those who care about Zimbabwe’s elephants, I urge you to sign it,” says Pincott.