HARARE, (Reuters) - Zimbabwe’s economy could grow by up to 6 percent this year, more than an initial forecast of 4.5 percent, due to the reforms being pursued by President Emmerson Mnangagwa’s government, the finance minister told a state-owned newspaper. 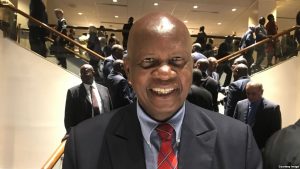 Mnangagwa, who came to power in November after a de facto military coup that removed long-time leader Robert Mugabe, has promised economic reforms to attract foreign investment and restore ties with international lenders so the country can access fresh funding.

Finance Minister Patrick Chinamasa said the government would be bold in reforming loss making state-owned companies and the mining sector, which generates the highest export earnings.

“I think that 4.5 percent (growth) projection may well be conservative,” Chinamasa told the government-owned Herald newspaper in an interview at the World Economic Forum in Davos.

“I will not be surprised if we end up, towards the end of the year, all things being equal, at around 6 percent growth.”