Zimbabwe Republic Police (ZRP) has warned motorists in the capital that more traffic enforcement cameras are set to be installed in every corner of the city to catch traffic offenders. 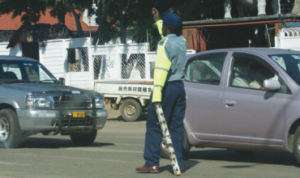 The national traffic police spokesman said there are no more cat and mouse games with traffic offenders.

Inspector Chigome and Mr Chideme were speaking at joint interview on capitalkfm about the introduction of video surveilance system to monitor traffic in the city.

“We are moving with time and technology,instead of playing cat and mouse games with commuter omnibuses or any other motorist we are using video camera system where we are actually taking videos of offenders or cameras are placed at intersection where they just take those videos and we are not chasing any motorist,” said Insp Chogome.

The traffic inspector revealed that the police don’t need to chase after any motorist as they use video footage to identify the car number plates. The car owner is then contacted after retrieving all the information from the central vehicle registration system.

Mr Chideme said municipal enforcement officers and police officers are now working together hand in glove to keep order in the city.

He revealed that city council is working with Zinara on arrangements to ban repeat offenders from renewing their licences or until the fines are paid up.

Chideme said more cameras would soon be installed in every corner in Harare as the tender has already been finalized.