When the army stepped in to put pressure on former president Robert Mugabe to leave office last November - which he did as we all know - thousands united in celebrating the exit of a much-loathed statesman who had ruled for an unbroken 37 years and ploughed the country down with all his efforts. 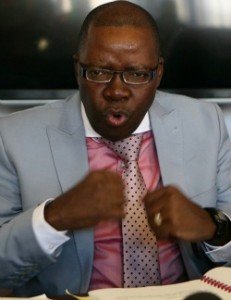 The army preemptively denied it was a coup, but many think that was a predictable bluff. They insist that the fact that Mugabe penned his own resignation is not the issue. Military tanks were, after all, snorting at him and they had been deployed without his consent as Commander-in-Chief of the armed forces.

After the euphoria, matters quickly ground to a screeching halt. In the post-Mugabe era, there seems to be a growing realisation that the very army that rescued them from his failed leadership could just as well be the albatross that will weigh heavily on their necks, come the 2018 elections.

The man who took over from Mugabe in late November, Emmerson Mnangagwa, has repeatedly promised free, fair and credible elections “in a few months” – which means by August at the latest.

That is proving to be a hard sell and a long throw, though. He was installed by the army and elevated the commander of the defence forces, Constantine Chiwenga, to vice president. Just about everything in the new administration is, ominously, smelling military and clanking like the high boots of gunners on the march.

People are talking about this, not in hushed tones, but loudly. The latest voices of caution rang at a recent policy dialogue, “Zimbabwe’s 2018 Elections: Perspectives on Transparency and Accountability” that was jointly organised by Information for Development Trust (IDT) and Sapes Trust.

The big money question, according to one of the panelists at the dialogue, Tony Reeler from the Research and Advocacy Unit (RAU), is: How probable is it that the militarised new dispensation can organise a genuinely free and fair election?

The poignant answer came from another presenter, Tendai Biti, the People’s Democratic Party (PDP) president and secretary of the MDC Alliance. “The post-coup scenario has brought extremely dangerous situations in Zimbabwe. The army has essentially taken over! There is nothing that will stop the tanks from moving again,” he said.

He was not done. “Because, when they planned this coup, they didn’t plan this coup in order to lose the election in July or August”.

Biti’s worry is that the army, having ensconced itself in the Zimbabwean body politic through the military intervention, will preside over a violent election if its newly found power is threatened. It wouldn’t be a new phenomenon, he argued. In 2008, Morgan Tsvangirai (May His Soul Rest in Peace) beat Mugabe in the first leg of the presidential race.

The military was accused of leading a systematic campaign of violence against opposition supporters that forced Tsvangirai to withdraw and give an acutely contested victory to Mugabe in the subsequent run-off.

In fact, Mugabe, as the army was showing him where to put his resignation signature last November, is said to have divulged that he wanted to concede defeat then but was forced to remain in place by the very army that compelled him to ship out nine years later.

Does that mean the opposition is resigned to what he said was the new dispensation’s attempt to “flatten” dissenters? No, he said. Primarily because the 2018 elections “are the most important elections of our generation”. In his words, if the opposition and the electorate get it wrong, “the junta (militarised post-Mugabe order) will be with us for at least 20 more years”.

Biti told a full packed seminar room at Sapes Trust that it would be pointless to proceed to elections without dialogue around the implications of a powerful military in Zimbabwe’s body politic.

And he agreed with RAU’s Tony Reeler that one key intervention would have to be to call the military to order through an independent multi-party taskforce that must also include SADC representatives and even a UN peacekeeping force and push the army to publicly swear its commitment to constitutionalism and avoid interfering with the elections.

The 2008 violent military involvement aside, the generals in early 2002, just before the presidential election, called a hasty press conference and issued a chilling “straitjacket” warning. They would NEVER salute a head of state without liberation war credentials.

And since Mugabe’s opponent, Tsvangirai, did not have such, their statement was seen as a coup threat in the event the opposition leader won. We all know that, officially, Mugabe beat Tsvangirai.

Wellington Gadzikwa, a media scholar who also spoke at the dialogue, said the new dispensation was not doing anything to change the media landscape. The public media cannot question the establishment because it is embedded in it. There is no media diversity or equal access to the government-controlled media, he said.