All is set for the Provincial chess selection tournament. This tournament will be held at Churchill school from the 24th to the 25th of February, 2018. Players from the seven Districts of Harare will be vying for the Provincial team slots in this tourney. the players will be drawn from the under 13, 14,15,16,17,18 and 20. 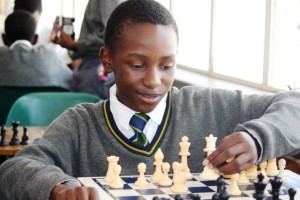 Farai Hamandishe of Mufakose 2 high school will be the favorite to scoop the under 18 boys section. He will, however, have some stiff competition from Kudakwashe Zimbowa.

A new breed of chess players will be ushered from the primary school section. This will create a lot of competition for these players as they will be playing in this selection tournament for the first time.
Ethan Lavandale of St. Johns Emerald Hill will be among the best players in the under 14 boys category, while Matthew Mhlanga will also be a boy to watch in the under 14 category. Hernandez Perez
will be the favorite in the under 16 category as he has acquired the experience in this section. The African Schools chess championships hosted last year was an eye-opener to the chess fraternity in Zimbabwe.
The level of competition has improved very greatly such that a lot is in stock from the seasoned players. Those interested in registering for the tournament can do so before the day of the tournament to facilitate
the smooth running of the tournament said the tournament Coordinator Mr Chimbamu. The players and schools need to register as soon as possible to avoid some inconveniences in the tournament organisation.

Harare as a chess powerhouse has proved over the years to be the best Province as they managed to produce players like International Master Robert Gwaze, international Master Rodwell Makoto, and International Master Farai Mandizha. National team players like Elisha Chimbamu who is a former National Champion as well as Lloyd Moyo. The Province is poised to do the same in the junior development in the game of chess as a lot of work is being done underground from Primary schools to secondary schools. More details of the tournament can be acquired from Mrs T Gandidzanwa and Mr Kahoba on their numbers as well as emails. Fireworks and eruptions will be out as the players put out their daggers to fight for the slots to represent the Province and all is set for a thrilling and mouthwatering weekend full of checkmates and tactical moves.