Crisis in Zimbabwe Coalition (CiZC) condemns in the strongest sense, the inappropriate and violent law enforcement process which resulted in the death of three innocent civilians as police tried to forcefully enforce an ill-timed ban of commuter omnibuses in Harare’s Central Business District (CBD). 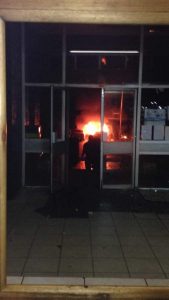 The Coalition also condemns the violation of the right to access information and the right to freedom of expression as gathered by the CiZC indicate that three journalists on duty and a civil society leader were attacked by police.

As CiZC, we also oppose, without exception, the project by the Ministry of Local Government, Public Works and National Housing with the Joint Operations Committee (JOC) of the Zimbabwe Defense Forces to de-congest the CBD of Harare with the removal or re-location of kombi mini-buses. In our view the involvement of JOC in local government authorities attests to the deep entrenchment of the military in civilian life.

Regardless of the said intended benefits, which we strongly oppose, as it is the duty of government to ensure that citizens always have ease of access to the CBD, militarization of local authorities has no place in Zimbabwe’s local governance system and erodes the principles of safety and security for all citizens which the above state institutions are all required to uphold and respect..

Local authorities in Zimbabwe have over the years been failing to deliver their mandate due to heavy involvement of the Ministry of Local Governance in the day to day operations of city councils. Representing a deepened and unconstitutional encroachment of powers by central government over our local authorities.

As CiZC we take stand and oppose any decision to de-congest Harare city without meaningful stakeholder consultations and clear plans and adequate budgets to ensure a smooth flow of operations.

We urge government, through local authorities to conduct wide stakeholder consultations prior to any decision that the government intends to make. The local government ministry and the army to respect the devolution of power to local communities as provided for by the constitution of Zimbabwe.

The government should immediately investigate the incidences that led to the death of the three citizens and make public the findings and apprehend suspects. Public institutions and office bearers involved should be held to account.

We maintain that the state urgently needs to reform the military and police forces to allow for the protection of life as enshrined in the Constitution and conform to best practises in managing conflict and crowds. Yesterday’s shooting undermines the national aspirations for human security in Zimbabwe and further support the notions of a Zimbabwe being a police state. Wanton killings have no place in a democratic society that we envisage.