ZANU-PF Matabeleland North provincial chairman Cde Richard Moyo has warned some members against going round the province lying that they had been seconded by army Generals to contest in the forthcoming elections. 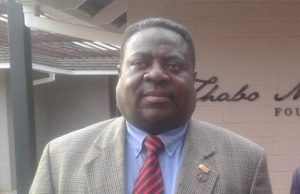 Cde Moyo said the party was yet to spell out regulations and requirements for those interested in contesting the polls.

He called on members to ignore those characters going around abusing the name of army Generals.

“The National Political Commissar Lieutenant General Engelbert Rugeje (Retired) said he is going to come up with regulations that will be sent out to all provinces stating who qualifies and who doesn’t qualify to take part in the primary elections.

“What we don’t want is for people to go around threatening people that they have been sent by Generals to contest yet we know it’s not true,” he said.

Cde Moyo, said the Zanu-PF National Political Commissar said all communication will be done through circulars.

The provincial chairman said they were engaged in outreach programmes in the province as well as strengthening party structures.

“We have so many programmes going on. As it is we are going round explaining events of November 15, how the new Government got into power.

“We are also looking at our structures, particularly cells because people that vote during primaries are from the cells,” he said.

Last month, the party announced that it had cancelled scheduled district and provincial elections to concentrate its energies towards the preparation for elections.

Zanu PF Secretary for administration, Dr Obert Mpofu said the party was waiting to finalise the selection of the new regalia and drafting of its election manifesto.

“What we are going to have are primary elections and we would like to call upon those vying for posts to wait for direction from the party. We are going to come up with guidelines that will be sent to the provinces.”