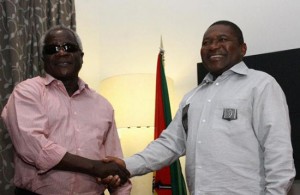 The consensus announced by President Filipe Nyusi on Wednesday is that a constitutional amendment should be passed changing the political system so that all provincial governors, district administrators and mayors are chosen by whichever party, coalition or independent citizens’group wins the majority of votes in the elections for provincial, district and municipal assemblies.

The abolition of the direct election of mayors had never been mentioned in public prior to Nyusi’s Wednesday announcement. Equally surprising is the proposal to form district assemblies. No political force had demanded this previously, and setting up a new tier of assemblies in the more than 150 districts will be an expensive undertaking.

The Frelimo Political Commission immediately welcomed Nyusi’s statement and issued a statement claiming that the consensus reached was a decisive step towards effective and lasting peace. It claimed that amending the constitution to accommodate this consensus “is a process that results from the socio-poliical dynamic and from the need to respond to the longings of the people”.

Frelimo, the Political Commission said, believed that the consensus was “the fruit of the involvement of the Mozambican people, who believed in the dedication, firmness, pragmatism and courage of the President of the Republic in leading the dialogue seeking an effective peace”.

Renamo spokesperson Jose Manteigas told the independent television station STV that Nyusi’s declaration “portrays the understanding reached between the two parties. With this understanding on decentralisation we, as a party, feel that the country has won, Renamo has won, Frelimo has won, Mozambican democracy is winning. So it’s a victory for all of us”.

Manteigas hoped that the other Mozambican political parties would also welcome the deal as “for the good of democracy”.

But the leader of theMDM and mayor of Beira, Daviz Simango, took the diametrically opposed view. “This package is a setback in our democracy and an agreement to deceive the people”, he said.

“We will have mayors, administrators and governors who do not emerge from the people’s will”, he said. “The politicians, in an indirect manner, will continue to appoint whoever they like, and will impose on the people those who should govern them”.

He accused the two main parties of forming a “FRENAMO”, reviving a term used several years ago by the MDM to denote a supposed coalition between Frelimo and Renamo.

“This is an agreement that contributes to bipolarisation”, said Simango, “and creates the conditions for FRENAMO not to not allow other political forces enter governance.”.

The Mozambican people had not approved the deal. It would be important, he stressed, for Nyusi and Dhlakama to ask the people “if this is the system of governance they would like to have. This is not the kind of agreement we were expecting”.