The ousted top members of Zanu PF’s G40 faction, and leaders of a new political party, New Patriotic Front, have formally petitioned the African Union and Sadc challenging the legitimacy of their arch-rival President Emmerson Mnangagwa. 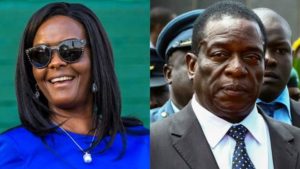 The 79-page dossier urging the continental body not to recognise Mnangagwa’s government on the grounds that it was born out of a military intervention was yesterday formally served by the new political party’s lawyer, South African Marius van Niekerk.

Most of the copies circulated to the media were received between February 2 and yesterday.

The NPF is pleading with Sadc and the continental body not to recognise Mnangagwa, who came into power following a military operation against former President Robert Mugabe in November last year .

Mugabe resigned following the military operation code named Operation Restore Legacy, but former Higher Education minister Jonathan Moyo claimed the veteran politician was forced to resign by the military. He added Mnangagwa should not be recognised by the international community.

The dossier contains minutes between Mugabe and the military’s top brass after he was put under house arrest.