….And thousands pledge to uphold peace ahead of the election. 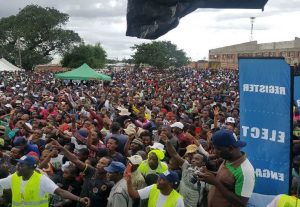 Part of the crowd that attended the peace concert

The objective of the peace concert was to mobilize citizens to register to vote as well as popularize the national peace campaign: 13 Million Voices for Peace and afford citizens an opportunity to pledge to uphold peace before, during and after the 2018 elections. The peace concert was attended by an estimated number of 7 000 people.

The major highlight of the concert was the overwhelming number of youths who were pledging to uphold peace ahead of the 2018 plebiscite. In an interview with Heal Zimbabwe on the sidelines of the peace concert, several youths hailed the peace concert as it taught them to be tolerant of each other’s political view. The youth were also able to make public peace pledges before community members. “The peace concert has taught us young people to practice tolerance and build peace among ourselves”, said one youth. Several youths then took to the stage and made public pledges to uphold peace and urged community members to shun political violence and be peaceful.

Musician, Madlela Skhobokhobo congratulated youths for heeding the call to register to vote in their numbers. Dance hall musician, Winky D also weighed in by underscoring the need for youths to be peaceful and encouraged them to be peaceful during voter registration and ahead of the 2018 elections. “I’m happy that we have all registered to vote but when its election time, lets vote in unity and peace”, he said before receiving a thunderous applause from the crowd

Zimbabwe Electoral Commission (ZEC) officials also took time to explain the BVR process in detail and applauded the organizations for such an initiative that seeks to encourage citizens to vote and be peaceful ahead of the 2018 elections. The Zimbabwe Human Rights Commission (ZHRC) also took time to educate citizens on their rights and highlighted that forcing people to submit serial numbers of voter registration slips is a criminal offence hence must be reported to police and the ZHRC. A total of 594 people managed to register on the day. Heal Zimbabwe and its partner organizations also encouraged citizens to register and vote in peace as the 2018 elections loom.

The peace concert in Bulawayo come at a time when Heal Zimbabwe has launched a nationwide peace campaign by conducting peace concerts as a way of encouraging citizens to uphold and pledge for peace ahead of the 2018 elections. In the past, the organization conducted a series of Youth Sports for Peace tournaments across the country so as to encourage youths to shun political violence and embrace peace. The youth tournaments were conducted under Heal Zimbabwe’s National Peace Campaign dubbed #13MilVoices4Peace, an initiative that aims to rally Zimbabweans to uphold peace ahead of the 2018 election.