Opposition MDC-T Vice President Elias Mudzuri says that he is very much in charge of the party as Acting President as appointed by ailing party President Morgan Tsvangirai. 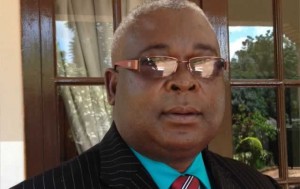 Speaking to ZimEye.com in an interview from Cape Town where he is attending a workshop on formulating and strengthening opposition coalitions, Mudzuri said that sentiments by Core Vice President Nelson Chamisa that he (Chamisa) is Acting President are misplaced.

“I am the official MDC-T Acting President as appointed by Morgan Tsvangirai,” said Mudzuri.

MDC-T Presidential Spokesperson Luke Tamborinyoka issued a statement mid day Wednesday that Tsvangirai had appointed Chamisa as fully in charge of the party.

The statement was followed by a letter allegedly written by Tsvangirai reaffirming that Mudzuri remains the Acting President discharging Tamborinyoka statement.

Chamisa dismissed the letter as fraudulent and a product of Mudzuri’s means of taking power in the MDC-T.

In response Mudzuri said that the letter is very authentic and was officially authored by Tsvangirai.

“Its up to you guys in the media to decide what to trust between what I tell you and what Chamisa tells you,” he added.

Mudzuri said that he will explain the confusion in the leadership of the party as soon as he returns to Zimbabwe in an official MDC-T Press Conference.

Mudzuri also told ZimEye.com that he was on his way to meeting with President Tsvangirai in Hospital in Johannesburg before making the trip back home.