CIO Director of Security Albert Ngulube who worked under former President Robert Mugabe’s regime and was tortured during the military blitz last November has been fired. 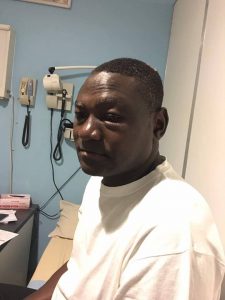 Albert Ngulube after being tortured

Ngulube has been fired together with others after they allowed former deputy President Joice Mujuru to meet Mugabe and his wife Grace at their Blue Roof Mansion. Mujuru after meeting the Mugabes has blown the whistle that indeed a coup took place.

During the November coup Ngulube was arrested near Mugabe’s home, just after briefing Mugabe on the security situation in the country.

He reportedly stopped when he saw army tankers going in the direction of Mugabe’s home and asked the troops where they were going.

The soldiers, however, seized him as he was among a group of people targeted for capture to ensure Mugabe is isolated from his key security and political personnel.

“They took his cellphone, watch and gold chain and later detained and interrogated him. He was heavily battered. He has some cracks on his head and could have died,” said an official.

An official said a military officer, who was not happy with Ngulube’s beating, informed senior army officials of his plight, resulting in the intervention of top commanders to secure his release.

Ngulube was released on Wednesday, taken to hospital and later home.