The human rights campaigner Pastor Evan Mawarire has made clear that he has no confidence in the government of President Mnangagwa. Speaking at a meeting in Parliament in London on Thursday, the #ThisFlag leader said Zanu PF’s culture seemed to be second nature to the government and predicted the upcoming elections would not be free and fair. 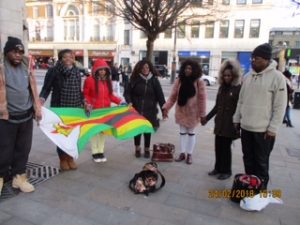 Mawarire said the ousting of Mugabe by the army had been a game of musical chairs; the same people who had served Mugabe were still in the government, with the addition of some military figures.

He said the new government had launched a road show proclaiming that Zimbabwe was open for business and that investors were welcome, but asked “Is it open for freedom?’ Mawarire observed that there had been no desire in the past by Zanu PF to allow Zimbabweans to be free. To deserve the people’s trust, the new regime must do things to earn their confidence. He said they could not ignore the past, such as Gukurahundi, and insisted: ‘it is incredibly important that the wounds of the past are attended to’, adding that the people responsible were still in the government.

Pastor Mawarire said the new government had much to do, such as aligning laws to the 2013 constitution, and insisted that POSA must be repealed because it contravened the constitution. Yet the government was moving slowly on this.

He warned his audience, which included members of both the Houses of Commons and Lords, that the British government must be careful in dealing with the new regime and not seek economic gain at the expense of the real interests of the people.

Questioned on the elections, Mawarire said he was not very hopeful that they would be any different from those in the past. The ones who had kept Mugabe in power were the ones now asking to be returned to office. However, he expressed confidence that change could not be long delayed if people could be mobilised. They had been slaves to politicians but had showed their real feelings when Mugabe was overthrown. Fear was in the past and the church was waking up.

On the MDC presidential candidate, Mawarire said his preference was for a younger person. ‘I would love to see Nelson Chamisa chosen if the party’s constitution allows it,’ he said, adding that there was a general acceptance of Chamisa.