Heal Zimbabwe is greatly concerned by the use of slogans that have potential of inciting political violence by political parties particularly by the ruling party, ZANU PF and MDC-T. 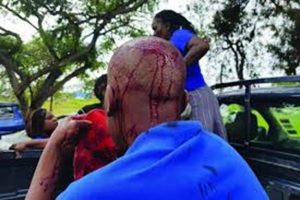 A NPP leader bleeding profusely after the Glen View attack

The slogans chanted by these two political parties during their rallies are inciteful and have violence undertones. Slogans such as “Pasi neMDC…” (down with MDC) and “chihurumende che ZANU PF mudenga, icho varoverei pasi!” (Lift the ZANU PF government up, crash it down hard) incite hate and animosity among political players. On 07 February 2018, while addressing a rally in Guruve, President Mnangagwa chanted a slogan “pasi nezvimbwasungata, pasi nemhandu”. The slogan if loosely translated means “down with enemies and sellouts” in direct reference to G40 members.

Heal Zimbabwe is greatly concerned that while the various leaders of these political parties have openly denounced political violence on one hand, their party systems and structures appear to celebrate violence via slogans. It is against such a background that political parties must therefore start inculcating a new political culture within their supporters that underscores the need for peace and political tolerance.

As the nation readies for elections, political parties must now take a leading role campaigning for peace and tolerance. It is Heal Zimbabwe’s view that denigrating slogans and all forms of political violence must be avoided if the nation is to conduct credible elections. Political parties must also remain guided by the provisions of the Electoral Code of Conduct for Political Parties which stipulates that NO political party or any of its members or supporters, and NO candidate or any of his or her supporters, may:

(a) use violence, or threaten violence or incite or encourage the use of violence, against anyone on account of his or her political opinions or membership or support of a political party or participation in the election;

(b) intimidate, or incite or encourage the intimidation, of anyone on account of his or her political opinions or membership or support of a political party; act in a way that may provoke violence or intimidation;

(c) use violence or threats or illegal pressure to force voter to refrain from voting or to vote for a candidate or political party against his or her will;

(d) force a voter to reveal the identity of the candidate voted for or take reprisals against a person because of the way in which he or she has voted or is believed to have voted.

As the nation readies for the 2018 elections, Heal Zimbabwe also calls on the National Peace and Reconciliation Commission (NPRC) to develop and implement programmes that promote national healing, unity and cohesion in Zimbabwe. Added to this, the NPRC must, in consultation with civil society and other relevant stakeholders develop mechanisms for early detection of areas of potential conflicts and disputes and take appropriate preventive measures to ensure that the 2018 elections are conducted in a peaceful environment.