National People’s Party President Joice Mujuru’s top aide says some soldiers have been arrested over the attack on her and party members in Glen Norah yesterday. 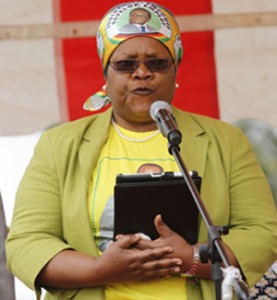 Mujuru had to be rushed to hospital after the stone attacks by suspected ZANU PF supporters in Glen Norah Harare yesterday.

I am reliably informed that the police has arrested the attackers and 5 of them are known military officers currently at Glen Norah police station. Can journos and @ZLHRLawyers look into this please. @hbaldwin we can not have military on duty in civilian attire commiting such.

The NPP Secretary General Gift Nyandoro has said the police have since effected some arrests on people suspected to have attacked Mujuru. (See the video with pictures of some of the injured)

BLOODY ATTACK – MUJURU SHOT AT WITH STONES, CHASED OUT OF GLEN NORAH

BREAKING NEWS – MUJURU SHOT AT WITH STONES, CHASED OUT OF GLEN NORAH

According to Nyandoro amongst the people arrested are members of the Zimbabwe Defence Forces.

“Following the attack of NPP President today police has since made five arrests and amongst them are two military officers at Glenorah police and police are withholding their names,” said Nyandoro.

ZimEye.com sources close to the opposition leader presented a medical report from a specialist radiologist indicating that x-ray tests were executed on Mujuru on the arm and eye following the attack.

NPP officials have not yet been able to provide ZimEye.com with specifics on the extent of the injuries on Mujuru.