Former Prosecutor-General Johannes Tomana, under charges of criminal abuse of office, since the Robert Mugabe days, has taken the state to court so he can be free. 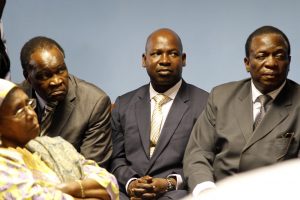 Tomana has approached the High Court seeking the dismissal of the charges under the basis of the State’s failure to prosecute him within six months set down in terms of section 160(2) of the Criminal Procedure and Evidence Act (Chapter 9:07).

The humiliated Tomana, was fired and kicked out of work after he was accused of interfering in the Gushungo bombing case, the latter which would have eventually seen President Mnangagwa being roped in as a suspect. The convicted so called “gang” were arrested and charged for allegedly attempting to bomb then President Robert Mugabe’s dairy farm.

Tomana wants an order returning his liberty and release of his bail recognisance held by the State. Tomana was indicted for trial on November 17, 2016 but he has not been tried yet even though his trial was set to commence in February last year at the High Court.

In his application, Tomana is arguing that in terms of section 160(2) of the Criminal Procedure and Evidence Act (Chapter 9:07), if no trial takes place for a period of more than six months from the committal date, the charges must be dismissed on the basis of the lapse of the indictment.

Responding to Tomana’s lawsuit, the State contends that Tomana and his lawyer Advocate Thabani Mpofu were not prepared for trial as they intended to make a constitutional application, which they did. The State also argues that from the date of Justice Chitapi’s verdict which criticised Ray Goba for lack of professionalism in the manner he was handling the matter, six months have not yet lapsed.