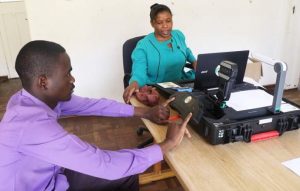 “We have received several reports about people who are moving around recording the serial numbers on voter registration slips.

Following such reports we would like to notify all Zimbabweans that doing so is an offence,” read the ZEC statement.

“We do not take orders from ZEC and yes we are collecting the serial numbers,” said Garirai aside Magaya.