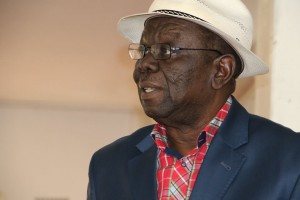 Three deputies are vying to act as MDC-T party leader in Tsvangirai’s absence. Spokesman Luke Tamborinyoka tells reporters that Tsvangirai remains unwell but will return to the country “soon.” The spokesman described those interested in succeeding him as “political vultures.”

The 65-year-old Tsvangirai has dominated opposition politics for close to two decades as the leading voice against former President Robert Mugabe, who resigned under pressure in November.

The upcoming election will be the first without Mugabe, who led the southern African country for 37 years. The opposition is scrambling to counter new President Emmerson Mnangagwa, a longtime Mugabe ally who has vowed that the election will be free and fair as he seeks to re-engage the international community after years of sanctions over alleged human rights abuses.

Tamborinyoka on Wednesday announced that Tsvangirai had appointed deputy Nelson Chamisa to act as party leader until his return. But other party members are disputing that, saying deputy Elias Mudzuri, who was acting leader before the announcement, or deputy Thokozani Khupe is acting leader or rightful heir.

An opposition alliance has endorsed Tsvangirai as its presidential candidate. But his condition appeared to have deteriorated when he met Mnangagwa in January.

The opposition infighting could come as a gift to Mnangagwa as he seeks to stay in power.