The Vigil marked the third anniversary of the abduction and presumed murder of the human rights campaigner Itai Dzamara. He was an inspiration to us and not long before his disappearance he sent us this message: ‘Your protest is not in vain.’ 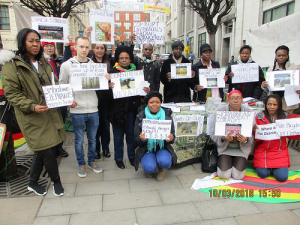 We are glad to see that Western diplomats in Harare are calling on President Mnangagwa to account for this outrage – one of the many committed by the Mugabe regime from which Mnangagwa must distance himself if he is to justify the welcome he has been given by the hopeful West.

Another decision must be to support the case for the reinstatement of the SADC human rights tribunal, closed at Mugabe’s behest because it ruled against farm seizures. One of the victims, Ben Freeth, speaking in London this week, said that, if Mnangagwa is serious about rebuilding Zimbabwe, he must put in place the right foundations. One step would be to recognise the recent decision by a South African court against former President Zuma’s arbitrary closure of the tribunal.

Like many others, Freeth expressed disappointment at Mnangagwa’s denial of the Zanu PF violence in the 2008 elections when Morgan Tsvangirai was forced to withdraw. It doesn’t bode well for democracy in Zimbabwe.

Freeth expressed alarm at the ‘militarisation’ of the government and of the Zimbabwe electoral commission. He said the new president had done ‘some cosmetic things’ but nothing to change the laws to create an enabling environment for investors.

He went on to warn Britain against a ‘cosy relationship’ with Mnangagwa unless he justified it by his actions and said it was not yet time for the diaspora to return. ‘That time will come. We look forward to that time. But it is not yet.’