A much-hyped Zimbabwean investment conference in London this week had to be radically changed at the last minute after a number of Zimbabwean government ministers were unable to get British visas. 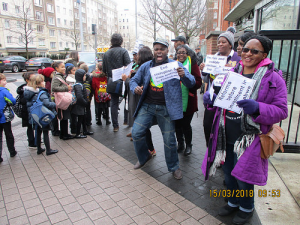 A much-hyped Zimbabwean investment conference in London this week had to be radically changed at the last minute after a number of Zimbabwean government ministers were unable to get British visas.

Mention of some of these delegates was later dropped from CAS’s website and when Vigil activists gathered early on Thursday outside the conference at the prestigious Royal Geographical Society we were unsure which of them, if any, would turn up. Representatives of the organisers appeared equally unsure when we asked them which ministers would attend.

The usual po-faced executive-type people bustled past a sculpture set into the wall of the building showing David Livingstone (‘discoverer’ of the Victoria Falls). They didn’t give it a glance but they couldn’t miss the Vigil’s banner adorned with posters reading: ‘Reforms before investment in Zimbabwe’, ‘Free, fair and credible elections in Zimbabwe’ and ‘End corruption and state looting in Zimbabwe’. Most people accepted our flyers, one of which read:

‘Beware Zimdaba 2018: Exiled Zimbabweans welcomed the ousting of Robert Mugabe in the military coup last November. But the Zimbabwe Vigil cautions against prematurely embracing the new regime represented here at Zimdaba 2018. They are out for your money because they have destroyed the economy. ‘We are open for business,’ they say. But so far it’s all words. No repressive laws have yet been repealed.

Apart from the addition of a few generals, an air chief marshall etc, the cabinet is made up of the same corrupt Marxist Zanu PF politburo. You do not have to hire ‘experts’ to look into the background of the delegates: simply google them yourselves. You will find, for instance, that the Chairman of the Special Economic Zones Authority, Gideon Gono, was the Governor of the Zimbabwe Reserve Bank when the Zimbabwe dollar was destroyed by record-breaking inflation.

Elections are due by August. Before you consider investing in Zimbabwe, you would be wise to see whether they are judged free, fair and credible. For further information about the situation in Zimbabwe see our book ‘Zimbabwe Emergency’, available from Amazon. It features some of the bogus ‘comrades’ you will be meeting at the conference.’

We noticed that, among the people attending the conference, was the former Labour government minister Lord Hain, who in his youth was a notable anti-apartheid activist. The South African newspaper Mail and Guardian has accused him of hypocrisy over his business interests in Zimbabwe (see: http://amabhungane.co.za/article/2018-03-16-lord-hains-zimbabwe-hypocrisy). Lord Hain left the meeting early.

FOR THE RECORD: 8 signed the register.