Maputo (AIM) – Mozambican President Filipe Nyusi, speaking in his capacity as President of the ruling Frelimo Party, declared on Friday that the two matters under negotiation between the government and the rebel movement Renamo, decentralisation and the disarming of Renamo, cannot be separated. 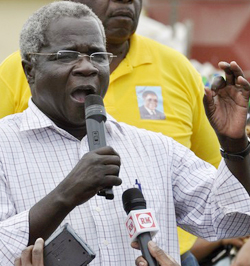 Addressing the opening session of a three day meeting of the Frelimo Central Committee, Nyusi said that, with decentralisation proposals now deposited with the country’s parliament, the Assembly of the Republic, the dialogue with Renamo had moved onto military matters.

“I would like to stress that the decentralisation package, and the demilitarisation, demobilisation and reintegration of the Renamo men are two inseparable components”, said Nyusi. “These are two processes which should advance at the same pace and in the same direction, which is to achieve effective and definitive peace”.

“The dialogue about peace has required a great deal of patience, pragmatism and tolerance”, he said, recognising that “sometimes this has been described as excessive patience and tolerance”.

Nonetheless, the dialogue “has allowed us to reach significant consensus with Renamo leader Afonso Dhlakama, particularly in the sphere of decentralisation”, he added. “The expectation of all Mozambicans is that Renamo does not delay the process by trying to introduce new demands, the substance of which is contrary to the consensus”.

“The model of decentralisation now under discussion in the Assembly may not be the most perfect, but it is the result of deep reflections, and debates in the light of a Central Committee decision”, said Nyusi

“Let us have the courage to advance with changes just as we did in the past”, he urged. “We were courageous when we decided to remain in power through elections, when we introduced a multi-party system (in the 1990 Constitution), even though some of us doubted that Frelimo would win in the first presidential and parliamentary elections”.

“The same fear arose when we opted to set up municipalities in cities and some towns and the provincial assemblies”, he continued. “Today, when we have the courage to accept another model of decentralisation, we do so knowing that everything depends on us”.

Nyusi did not go into details on the draft constitutional amendments on decentralisation arising from his negotiations with Dhlakama. These amendments, now under discussion in the Assembly’s working commission, have caused controversy since they seek to abolish the direct election of mayors in the 53 municipalities.

They envisage the election only of municipal, provincial and district assemblies. Whichever party won the most votes in these elections would then appoint the mayor, provincial governor or district administrator.

The Frelimo Political Commission had second thoughts about this and earlier this month proposed that all these elections should be held on a “head of the list” model. That is, whoever was the first name on the winning list for a municipal, provincial or district assembly would automatically become mayor, governor or administrator.

This means that when citizens vote for an assembly they need only look at who is heading the party list to know who they are choosing for governor, administrator or mayor. Although there would only be one ballot paper, the voters would be voting simultaneously for an assembly and for the governor, administrator or mayor.  It is not yet clear whether Renamo will accept this change.

Turning to Frelimo’s defeat in the mayoral by-election in the northern city of Nampula, won on the second round  by Renamo candidate Paulo Vahanle, with almost 59 per cent of the vote, Nyusi pointed out that Frelimo has been in opposition  in Nampula since 2013, when the second opposition party, the Mozambique Democratic Movement (MDM), won both the mayoral and the municipal assembly elections.

So Frelimo did not lose Nampula – but it did fail to win the by-election, and this “puts to the test the capacity of Frelimo to face and to win the forthcoming electoral contests”.

Nyusi did not want any self-pity. “Frelimo does not behave like a victim”, he said. “Frelimo transforms challenges into opportunities to solve problems”.

There will be nationwide municipal elections on 10 October, and presidential, parliamentary and provincial elections in 2019.  These will be held “under the new model of decentralisation, and in a context adverse to our party”, warned Nyusi. “The next elections are a major challenge, but also an unequalled opportunity for Frelimo to demonstrate once again its ability to win great battles”.

But he insisted that Frelimo’s own internal organisation for elections must change. “We need an internal electoral structure that is flexible, modern and able to rise to new challenges”.

During elections, Frelimo sends “central brigades” from Maputo into the provinces and municipalities to assist the local party militants. Nyusi insisted that they must not try to run the show.

“The job of the central brigades is to assist and monitor. They should ensure strict compliance with the Party’s norms and other instruments”, he said. But they must not “replace the party’s local bodies”.

In discussing the country’s economic situation, the Central Committee will focus on the cost of living. Nyusi wanted the meeting to seek solutions for bringing down the cost of living “and not deal with marginal questions that facilitate the life of a particular group of individuals”.

The President wanted Frelimo to assert itself as “a modern party, and not as an absolutist one”. He stressed that Frelimo has never been afraid of changes in the past, and only by maintaining that spirit “will we leave this meeting more united, reinvigorated and more focused on victories”.

After the opening speeches, the meeting continued behind closed doors.