Harare - Former first lady Grace Mugabe says she convinced her husband to stand down after last year’s military takeover when he was determined not to, it has emerged. 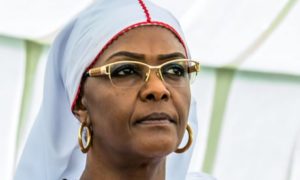 Grace Mugabe’s political ambitions are believed to be the reason behind the army’s decision to stage a coup. Photograph: Philimon Bulawayo/Reuters

Grace Mugabe made the claim during a surprise press conference her husband gave at the couple’s Harare mansion this week.

‘It was me who urged him to resign’

“Baba (father) did not want to put pen to paper, in fact it was me who urged him to resign for the sake of peace because Baba did not want to,” Grace Mugabe said, in comments carried by the private NewsDay.

Mugabe confirmed his wife’s role in helping to persuade him. “Under the circumstances I didn’t want to step down because I felt it was not proper and I insisted that everything was done unconstitutionally,” the 94-year-old said.

He said he was willing to face impeachment proceedings by MPs from his party and the main opposition but his wife had convinced him that “the process would take long and in between, the country could plunge into anarchy and bloodshed.”

Mugabe told reporters that last November’s takeover was a “military coup” – a phrase his successor Emmerson Mnangagwa has done everything to avoid.

Mnangagwa’s office has shrugged off the criticism, insisting on Friday that while Mugabe was free to express himself the country had “moved on”.