With Mugabe’s catastrophic 40-year rule finally over, there’s optimism on the streets of Zimbabwe. Novelist Katherine Rundell revels in the newfound liberty of her childhood home. 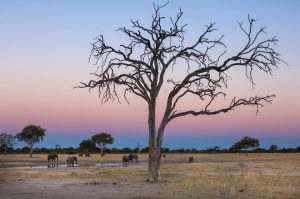 Three weeks ago a young elephant wound her trunk around my arm and began – politely, elegantly, insistently – to pull my hand into her mouth and suck the salt sweat off my fingers. It was the happiest I’ve been this year, that moment; partly because of the elephant and partly from that knee-jerk joy; the one that says home.

My mother was born and raised in Zimbabwe, and I spent part of my childhood in Harare; we left in 2001, but I go back every year. This January, I returned to a new regime, and a new feeling in the streets. Nothing yet has visibly changed, except that the police road blocks which used to spore across the city on payday have gone, but the air felt newly oxygenated.

The new president, 75-year-old Emmerson Mnangagwa, was previously known to the country as the head of Mugabe’s Central Intelligence Organisation. He was closely associated with the Gukurahundi, the massacre of tens of thousands of Ndebele people in the 1980s. Ruefully, warily, people call him The Crocodile. But change – any change – has felt galvanic. The day Mugabe resigned, you could hear the city roar.

For a visitor to Zimbabwe, Victoria Falls is the best place to begin. Its tiny town is structured to look not unlike a frontier in the wild west, but with curio shops selling wire toys instead of saloon bars, and spotlessly clean if dilapidated hotels. On my last visit, I stayed at the N1 Hotel, where the linen is threadbare but fresh, and from there walked to the bridge that leads over the Zambezi and into Zambia

If you’re of that specific constitution that enjoys jumping off things, you can bungee or zipwire from here. I did not jump; I went at dusk, in warm rain, and watched the sun drop over the brown-gold roar of the water, stepping aside to let women pass as they returned home from their day jobs over the border, balancing piles of parcels three feet high.

The falls themselves are known as the Mosi-oa-Tunya, “the smoke that thunders”, because the spray cast up by the water cascading over 100 metres into the pool below forms a constant halo of water in the sky. Plastic rain macs in hot pink and yellow can be bought outside the entrance, but they are of largely ornamental use; the water comes at you like an opera. The beauty of it – the sweep and scale and bellow of it – makes you shake and its height is dizzying. Once, my guide told me, he saw an elephant try to swim across the river above the falls to one of the small islands of rock. It stopped, tried to go back, trod water, and went tumbling over the edge. I expressed sympathy for the elephant but the guide shook his head. “Natural selection,” he said.

Zimbabwe was once the place to go to find the true wilderness of southern Africa, and in the last few years that has again become true. From Victoria Falls the drive to Hwange national park takes four hours, past farms and villages, and monkeys and goats crowding the road. Hwange is vast, 5,657 square miles, a fair bit bigger than Belgium

During the hardest years of Mugabe’s reign, part of the land was taken over by the so-called war veterans, and poaching was rife. But now rangers are fighting back, and the park is thrumming with life. If you have the budget there are exquisite camps – Linkwasha and The Hide are among the best – where you can look out over the plains from the dinner table, but it’s also possible to stay in the government lodges and drive yourself around the winding trails. We saw elephants rolling in mud, sending up cascades of brown water in their trunks, and prides of lions with their young, the cubs half-grown but still with the over-large paws of babyhood. At sunrise we drove through a cloud of white and yellow butterflies large enough to fill a London flat.

Victoria Falls and Hwange are the places every visitor must see, because they offer up the country at its iconic, filmic, hypnotic best; but it’s Harare I love most. The streets in the city haven’t been repaired for years, and the potholes are monumental. Walking home in the hot torrential rain, you can find yourself suddenly and unexpectedly calf-deep in water; I’ve seen ducks swimming in sudden lakes in the middle of the road. But to drive through Harare is a rare and urgent pleasure; the colours offer a small sliver of the kind of joy usually reserved for children and those who take hallucinogenic drugs.

Many people picture Africa as yellow-brown and scorched, but Harare is green, with a sky so blue that it’s almost white. Flowers grow by the side of the road – red and pink bougainvillea, purple jacarandas – and threaten to engulf the lampposts. Men and women set out their wares on the grass verges: stone sculptures and picnic benches, dog kennels and grave stones, ostrich feather dusters and mangoes. In October it gets hot enough for the tar to melt, and discarded metal bottle caps set into the tarmac; for the rest of the year you drive over jaunty miniature advertisements for Coca Cola and Schwepps lemonade. It reminds me always of when I was young, when the greatest treat conceivable was a Coke float – a scoop of vanilla ice cream dropped into a glass of cola, creating a volcanic eruption of cream – drunk with a straw in the park in the centre of the city. Any restaurant worth its salt in Harare will sell you one, if you have the perspicacity to ask.

Harare is, too, an ideal base to make shorter excursions in search of the wild. There’s the luxurious Imire game reserve, which guarantees you’ll see four of the big five, and the Wild is Life sanctuary, out by the airport, where you can hand-feed the giraffes and watch the rescued elephants drink from milk bottles, and meet a quiet, wise-faced pangolin.

But the gem of my childhood was Lake Chivero, a game park 45 minutes’ drive from the city. The sandy pathways through woodland and open plains require four-wheel-drive, and so it’s rarely busy; there are days when you won’t see another human, only the kudu and impala and supercilious-looking lizards. As children, my brother and I would wind down the window and sit on the sill of the car, the wind blowing our hair into our eyes, noses blowing out ribbons of snot, clutching onto the roof in screaming joy and ducking back in whenever an ostrich came into view. (I am afraid of ostriches, in part because a kick from an ostrich can kill a grown man, and in part because their eyebrows are so ruthlessly judgemental). There are no lions or elephants here, but giraffes pace across the road with the leggy poise of catwalk models, and occasional rocks transform into rhinos. Two years ago, walking out into the bush by myself, I met a green mamba; its vivid emerald beauty something I appreciated only after I had backed swiftly away.

It’s possible to stay overnight at Chivero in one of the compact self-catering lodges (double chalets from $45), though only for those who don’t mind a ramshackle, camping kind of existence. When last I went, the first lodge we were offered had a fridge with no door. The second was full of bees. But in both, the lavatory paper had been folded to a perfect point by the housekeeper. Chivero reflects the spirit of the country; run down but ferociously determined to make the best of it. The same is true of Zimbabweans themselves. In southern Africa they are famous for their humour – deadpan, gallows, enduring.

My favourite place in Harare, though, is half an hour out of the city centre in the other direction. The Charles Prince airport is a sun-bleached airfield where, for the last few years, I’ve been very slowly learning to fly a tiny yellow two-seater plane. Once, this was one of the busiest airfields in southern Africa; tobacco farmers would fly in for the auctions, sell their crop, get drunk and fly home again. When I went last month it was largely deserted – the refuelling station, a tin-roofed hut in the centre of the airfield, had grass growing in the doorway, and there were black and white storks on the runway – but the Mashonaland Flying Club was still willing to take visitors up into the sky (around $150 for half an hour).

The moment in which a plane takes flight under your hand is an astonishing thing; the lift of the metal wings as unlikely as a pumpkin coach, a golden egg; an outlandish fairytale promise made good. It was possible to see from above the teenagers hitching lifts, the brick-makers smoking on their breaks. We turned south, flying towards the hills and over lakes and carpets of green, and then east to follow the line of the motorway.

I could see new developments rising up in the suburbs and the billboards for fast wifi and perfume. Commuter omnibuses wove wildly around the traffic. And a stork was circling below, its wings sweeping up and down like a magician’s wand, conjuring the sky an ever brighter shade of blue.

• Katherine Rundell’s The Explorer (Bloomsbury, £7.99) was the winner of the Costa Children’s Book Award 2017. To order a copy for £6.79, visit guardianbookshop.com

Flights
British Airways fly from London to Harare via Johannesburg from £827 return. Responsible Travel offer tailormade holidays to Zimbabwe – taking in Victoria Falls, Hwange national park and Lake Kariba, from £2,350 for 10 days excluding flights, based on two people sharing with all meals, accommodation and activities.

Zimbabwe’s dry season is from May-October, meaning milder tempertures and a lower risk of malaria, though by October the temperature can hit 30C-plus. These months are the best time to visit for safaris, and to be in Harare. The rainy season runs from November to March but for Victoria Falls, June-September is the best time to visit as there is less spray obscuring the views.

Prices
In Harare a beer will set you back about £1.60 while a meal for two will cost between £6-£30, according to expatistan.com