THE Zimbabwe Republic Police have warned political leaders not to spill blood in order to hold political office as the country gears up for elections'. 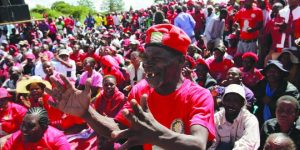 Addressing journalists in Mutare on Monday on an elections safety and security training workshop organized by Misa Zimbabwe chapter, police spokesperson Paul Nyati said politicians had a habit of inciting their supporters to perpetrate violence.

“We want to urge the politicians not to use youths or influence them into acts of violence. In fact political leaders must tell the youths and warn them of the pitfalls of violence. Politicians must not spill blood in order to hold political office,” said Nyathi. “As the police we pledge to maintain law and order in the run up to the 2018 general elections,” he added. Nyathi urged the media to encourage political leaders in Zimbabwe to shun political violence ahead of the forthcoming elections.

“The ZRP and the media must work together when it comes to issues of reporting election violence. We cannot do without each other. The media must play its role in reporting issues that have to do with violence,” he said, adding that the media plays a pivotal role in preaching peace. “The ZRP and media must assist in promoting messages of peace to the people,” added Nyathi.

He urged media organisations to be objective in their political reportage. “We want the media to be objective and it must not write or publish stories that polarize our communities,” he said.

President Emerson Mnangagwa has promised that the forthcoming elections, which are likely to be held before August, will be free, fair, credible, transparent and violence free. Political analysts have said Mnangagwa must show his commitment to a free and fair election by inviting observers from any part of the globe.