Pretoria - The Southern African Development Community (SADC) on Tuesday said it was gearing up to support the holding of highly anticipated presidential elections in its member states -- Zimbabwe and the Democratic Republic of Congo. 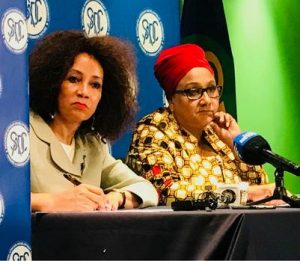 At the conclusion of a SADC Council of Ministers summit in Pretoria on Tuesday evening, Executive Secretary of the regional block Dr Stergomena Lawrence Tax said the much needed support will be afforded to the two nations, and advance observer missions had already visited Harare and Kinshasa.

“How we support our sister countries is that we observe elections. In both cases we have sent and undertaken our advance missions. Those missions assess the preparedness of the country, and that was done in the DRC and also in Zimbabwe,” said Tax.

“The next phase will be to observe elections. We have already been invited for Zimbabwe. We are waiting to be invited for the DRC. The invitation will come depending on the electoral calendar. As you are aware, elections in DRC take place on the 23rd of December so we still have time to get the invitation.”

She emphasised that all member states will be supported to hold credible elections.

On Monday, Zimbabwe’s Foreign Affairs and International Trade Minister Sibusiso Moyo who was in Pretoria for the SADC summit told journalists that the upcoming first elections post the Robert Mugabe-era will be credible.

“Zimbabwe is preparing for harmonised elections around July or August, and we believe that the election is going to be free and fair… a credible election. We have allowed anybody who wants to observe our elections to come in so that they can really see for themselves,” said Moyo.

“The winner is going to be the winner — without any limitations. We are saying everybody (should) come and observe. We are saying, the benchmark we are going to be using is the SADC guidelines for elections. That’s what everybody must use. SADC is where we belong, that is why we are here.”

Moyo said the elections will also be in line with the African Union prescripts and guidelines.

Regarding the atmosphere in the post-Mugabe era, Moyo said the small southern African nation was moving on perfectly.

“Harare is excellent, is full of oomph and it is looking forward to a serious economic trajectory, all over the country.”

Mugabe, 94, was removed from the position of president of Zimbabwe in November 2017 following a military intervention he has since described as a coup d’etat and therefore unconstitutional.

When Zimbabwe goes to the polls this year, Emmerson Mnangagwa will face a stiff challenge from Nelson Chamisa who took over as the new leader of the country’s largest opposition party, the Movement for Democratic Change after the death of Morgan Tsvangirai.