The residents of Zaka district ward 19 have acknowledged the responsiveness of local leaders to community social accountability demands, as the Zaka Rural District council prioritized the refurbishment of Magwede Bridge a long time request by Zaka Residents. The bridge was revamped with the plough back funds disbursed by the RDC. 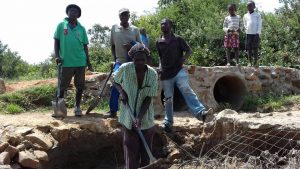 The pictures of Magwede Bridge in Zaka District, Masvingo province.

The social audit conducted by Community Tolerance Reconciliation and Development (COTRAD) Action for Accountability Groups (AAGs) has revealed that service delivery has been hampered by the lack of a proper bridge at Magwede, school children were inconvenienced during rain seasons, old people and women were in a difficult situation, people were using long roots to and from Jerera Growth Point.

The community engagement meetings facilitated by COTRAD between villagers and public officials helped Zaka residents to demand the rehabilitation of Magwede Bridge and resuscitation of dilapidating roads with the development levy – plough back funds. Zaka Central Constituency ward 19 Councilor Mr P Imbayarwo highlighted that, the Zaka RDC managed to rehabilitate the Magwede bridge which links Jerara Growth Point with Mushayavanhu, Magwede, Chipezeze, Chisinde, Muredzi, Mukachana, Marare amongst other villages in VIDCO 1 ward 19. “As public officials we encourage all villagers to pay their development levy in time so that the council will have sufficient resources to improve service delivery and community development” said Mr Imbayarwo.

COTRAD therefore maintains that it is the role of the public officials and Rural District Council to be accountable and responsive to social service delivery and infrastructure development concerns raised by the people in their districts. It is enshrined in section 276 (1) of the constitution that, the rural district councils should raise sufficient revenues for them to carry out objectives and responsibilities in areas of their jurisdiction. COTRAD also encourages the villagers to fearlessly engage public officials and relevant ministries to present issues affecting their communities.