Once one of Africa’s most promising economies, Zimbabwe suffered decades of decline under former President Robert Mugabe. 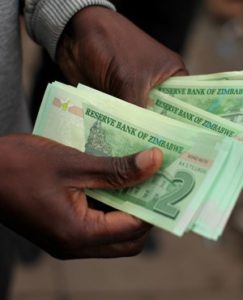 LONDON – Zimbabwe expects to make up for all its debt arrears to major international lenders by September and could return to international capital markets thereafter, its central bank deputy governor said on Friday.

Once one of Africa’s most promising economies, Zimbabwe suffered decades of decline under former President Robert Mugabe and has been shut out of international capital markets since it began defaulting on its external debt in 1999.

In 2016, Zimbabwe paid off 15 years’ worth of arrears to the International Monetary Fund (IMF). It is still years behind on payments to the World Bank and African Development Bank, however, hampering its ability to tap development financing from the two.

“The ball is in our court, it is not with the IMF or the World Bank or the African Development Bank,” Khupikile Mlambo, deputy governor of the Reserve Bank of Zimbabwe, told Reuters in an interview on the sidelines of a London investment summit.

Zimbabwe was working on the Lima plan – a payment plan agreed with foreign lenders in 2015 in the Peruvian capital.

“We are on course for September for sure to repay,” he said.

Zimbabwe has $1.75 billion in foreign arrears. The IMF has suggested Harare cut public sector wages and farm subsidies as well as improving transparency in the mining sector and reaching an agreement on compensating farmers.

Once its multilateral arrears are cleared, the bilateral debt would be next on the agenda, said Mlambo, which could happen by the end of the year.

“It is optimistic, but if we could do everything by December I would be very happy,” he said. “At least if we can clear all the multilateral debt, then we can begin to make approaches towards international capital markets.”

Mlambo said policymakers were also pushing measures to tackle the country’s acute shortage of US dollars – its official currency since Harare ditched its hyperinflation-wrecked currency in 2009.

Shifting transactions away from physical cash into electronic transfers and payments should alleviate some of the pressure, he said, while increasing exports from an investment into the country should also provide liquidity.

Mlambo estimated that Zimbabwe had printed $290 million in “bond notes” since 2016 when it introduced the instrument to boost the amount of cash in day-to-day circulation.

Foreign funds’ difficulties in repatriating money from Zimbabwe has seen the number of foreign investors shrivel in recent years. But the central bank is launching a fund in the coming months to tackle this, said Mlambo, adding that preliminary agreements with all banks involved had been signed.

“We want to ringfence all the new investments that come in so that these monies do not mingle with the local US dollar that we have, and it remains a really liquid foreign currency that they can take out.

Talking about economic expansion, he said recent droughts were not seen hurting economic growth, which is forecast at 4.5% in 2018.

“It is not as bad as it looked in December… We are still very happy with our forecasts,” adding that if planned policy measures to boost the economy were put in place, Zimbabwe’s economy could expand at an even faster rate.