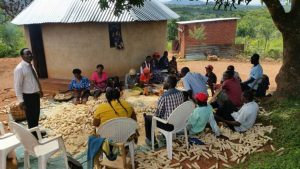 Communities in Mbire and Mutasa have expressed grave concern over the politicization of government food aid particularly from the Ministry of Public Service, Labour and Social Welfare. This was revealed during a series of collaborative neutral platforms carried out by community peace clubs established by communities that work with Heal Zimbabwe from 10-21 April 2018.

The collaborative neutral platforms were attended by a total of 14 Village heads, 5 Councillors and 16 Village Development Committee (VIDCOs) members. A total of 600 people attended the neutral platforms. The collaborative platforms included clean up campaigns, harvesting of crops and shelling of maize. Community members highlighted that in most cases, Councillors and Traditional leaders (mostly Village heads) were denying food aid to people who refuse to submit serial numbers of voter registration slips. They also noted that this has created serious political labelling which continues to be a hurdle in the attainment of social cohesion and peace. “Traditional Leaders and Councillor deny food aid if you fail to submit your serial number of your voter registration slip on time”, said one community member from Mbire.

One peace club member from Mutasa pointed that although forcing citizens to submit serial numbers of voter registration slips was illegal, the responsible authorities such as the police were not making effort to deal with reports. “We have reported numerous cases of Traditional Leaders and Councillors to the police but to this day, none has been arrested. This is worrying because as we go for elections, we are worried that the police might not swiftly respond to cases of political violence as was the case in 2008”, he said.

However, Communities acknowledged that from the time Heal Zimbabwe initiated Sports for Peace tournaments as part of its national peace campaign dubbed: 13 Million Voices for Peace #13MilVoices4Peace, there has been relative peace within communities. Community members also revealed that there has been a change of attitude by some perpetrators of violence who   pledged for peace and some even expressed desire to organize more peace tournaments within their areas. The national peace campaign is a nationwide peace campaign that seeks to encourage citizens to uphold and pledge for peace ahead of the 2018 elections.