Community members in Gokwe, Mutoko, Murehwa, Mazowe, Makoni and Mbire have expressed concern over the continued involvement of Traditional leaders in partisan politics. 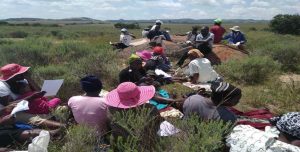 This came out during a series of collaborative neutral platforms conducted by Heal Zimbabwe under its national peace campaign from 13 March to 13 April 2018. The objective of the collaborative platforms (nhimbes) was to raise awareness on the need for peace and tolerance ahead of the 2018 elections.

The organisation through its 15 Community Peace Clubs, seven Women Safe Space for Reconciliation and two Community Based Organisations from the targeted districts mobilized community members to participate in nhimbes that included harvesting of crops, road gulley filling and clean up campaigns at schools and business centres. The nhimbes were attended by a total of nine Village heads, three Headmen, two Councillors, eight Ward Development Committee members (WADCO) and 11 Village Development Committee (VIDCO) members. A total of 880 community members were reached through the activities conducted. The nhimbes were conducted under Heal Zimbabwe’s National Peace Campaign: 13 Million Voices for Peace which seeks to raise public awareness on the need for peaceful participation in the upcoming 2018 elections.

Across the districts, community members who participated in the collaborative neutral platforms bemoaned the partisan nature of Traditional leaders which they noted as a hindrance to the attainment of peace and social cohesion. In some instances, Traditional leaders are forcing community members to submit serial numbers of voter registration slips and threatening to withdraw food aid from people who fail to comply. “We are living under fear here in Gokwe, Traditional leaders harass and intimidate us by threatening to deny us food aid from the Ministry of Social Welfare if we fail to submit serial numbers of voter registration slips”, said one community member from Gokwe.

Several community members who interacted with Heal Zimbabwe revealed that although they have reported some Traditional leaders to the local police, this has not deterred them as some are still carrying out the exercise. This is besides the fact that Section 281.1 (d) of the constitution points out that Traditional leaders must not; “violate the fundamental rights and freedoms of any person”. Community members further noted that because of the partisan nature of some Traditional leaders, communities were now living in fear and were worried that the secrecy of voting will be greatly compromised as elections draw near.

Heal Zimbabwe implores the Ministry of Local Government, Public works and National Housing to reign in on errant Traditional leaders who are meddling in partisan politics and violating fundamental human rights and freedoms of citizens. Added to this, Political parties must desist from abusing Traditional leaders but rather use them as avenues to build tolerance and social cohesion in local communities. HZT has since forwarded all cases of human rights violation to the Zimbabwe Human Rights Commission (ZHRC).