Crisis in Zimbabwe Coalition (CiZC) in conjunction with the Centre for Community Development in Zimbabwe (CCDZ) on April 19, 2018 hosted a civic society and political parties interface meant to deliberate on progress towards amendments to the country’s Electoral Act. 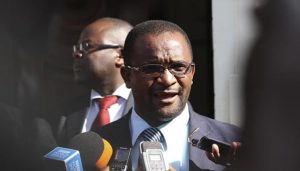 The meeting, held in Harare, was attended by various civic society organizations and representatives from political parties.

It came out during the meeting that the piecemeal amendments to the Electoral Act as well as the lackadaisical approach by the ruling party, Zanu (PF) which has majority representation in Parliament, was taking away prospects of free, fair and credible polls set to be held between July and August 2018.

Chairperson of the Parliamentary Portfolio Committee on Justice, Legal and Parliamentary affairs, Fortune Chasi who is also Zanu (PF) Member of Parliament for Mazowe South admitted that little has been done to amend the country’s Electoral Act so that it conforms to the constitution.

He said this was a subject of concern especially given the fact that the country is left with a few months before it holds elections.

“It is not proper that a few months before the elections, we are still squabbling about what the law is. Not only must the law be clear but it must also be in place on time. I would personally give ourselves as a country 1 mark out of 10,” said Chasi.

He also admitted that currently, there have not been efforts that have been made to increase the participation of people with disabilities in electoral processes.

MDC-T representative, Douglas Mwonzora said that currently, there are a number of issues which need urgent attention as they are taking away prospects of free, fair and credible polls.

“Although ZEC said that we will have a voters’ roll by the end of April (2018) it is clear that we will not be able to have one by that time,” said Mwonzora.

He also expressed concern over the government’s refusal to allow Zimbabweans living in the Diaspora the opportunity to cast their vote.

“On top of that, the State media is not being open to opposition parties and the government as also blocked the observation of the printing of ballot papers,”said Mwonzora.

He added that the continued involvement of the military in electoral issues casts doubt over the credibility, freeness and fairness of the 2018 polls.

“The military has intervened in elections over the past years and they will likely do the same in 2018,” said Mwonzora.

In light of the challenges, Harare West Member of Parliament, Jessie Majome who is also a member of the Parliamentary Portfolio Committee on Justice said there is need for strengthened advocacy to demand reforms to the country’s Electoral Act.

She said it was clear the ruling party; Zanu (PF) was against amendments to the Electoral Act.

“The attitude of the present government is that they don’t want electoral reforms. They don’t want amendments to the Electoral Act because it serves them as it is,” said Majome.

MDC-N Legislator, Priscilla Misihairambwi told the meeting that the impartiality and professionalism of ZEC was critical for free, far and credible polls adding that voter education ought to be gender sensitive.

“The amendments to the Electoral Act must seek to crate safe spaces for women as well as to address the issue of women representation in electoral processes,”said Misihairambwi.

She said that in as much as Zimbabweans have been made to believe that the country was in a new dispensation, the situation on the ground paints a different picture.

CCDZ Director, Dr. Philip Pasirayi expressed concern over draconian laws such as the Public Order and Security Act (POSA) and the Access to Information and Protection of Privacy Act (AIPPA) which he said limit the capacity of civic society organizations to effectively access the pre-election environment.

Zimbabwe’s Parliament is set to debate the Electoral Amendment Bill on May 8, 2018 and there was consensus among parliamentarians and civic society organizations present during the meeting that there is need for intense lobbying before the parliamentary debate.

Action points agreed during the meeting included the need for civic society organizations to develop a position paper that will enable them to effectively contribute to the debate on electoral reforms.

There was also consensus that civic society organizations need to develop a checklist of the SADC guidelines on free, fair ad credible polls against the current Zimbabwean position.