Presidential Elephant Specialist Sharon Pincott accepted an invitation to travel from Australia to China for a school conference, in an effort to inspire children from the Asia Pacific region to ‘Dare to Be A Force of Nature’. While still in China, she went on a secret mission to Beijing zoo, to check on the conditions at this facility, which Zimbabwe’s wildlife officials have reportedly deemed ‘an appropriate and acceptable destination’ for our elephants. 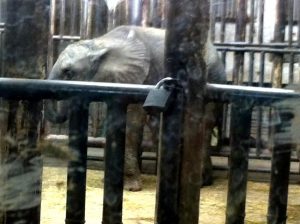 The Zimbabwean (TZ) speaks to Sharon Pincott (SP) about her two recent visits to Beijing zoo.

TZ:  Sharon, what made you decide to visit Beijing zoo?

SP:   Everybody who cares about elephants, and especially those close to Zimbabwe, wonder how the young elephants, ripped from their mothers and families in Hwange and eventually flown to Chinese zoos, are faring. I understand that Beijing zoo is one of those in China deemed an appropriate and acceptable destination for elephants, apparently by both the Convention on International Trade in Endangered Species (CITES) and by Zimbabwean officials. From the amount of negative comments I’d read on sites like Trip Advisor about the condition of the elephant facilities there, I needed to see it for myself, since I knew that other sites around China where Zimbabwe’s young elephants are ending up, will no doubt be of a similar standard.

TZ:  What was your first impression of the Beijing zoo?

SP:   I was unaware that there was more than one entrance to the zoo, and with me unable to speak Chinese, I let the Chinese-only speaking taxi driver drop me off wherever he decided to. I found myself closest to the Panda enclosure and first took the opportunity to visit the pandas – and I was, actually, pleasantly surprised. Knowing nothing about pandas, their cages seemed to me to be reasonably sized in relation to the pandas’ body size, and they were clean with various things installed so that the pandas could entertain themselves. They had food that looked fresh and appetising. Their outside areas, which were definitely being utilised, looked reasonable too. The price to get into the zoo is only about US$5.00 and so there were local people everywhere, jam packed around the popular attractions.

TZ:  What was your first impression of Beijing zoo’s elephant area?

SP:  The elephant area was at the other end of the zoo, and although not that far to walk, I’m not too well these days, and so by the time I got there I needed to rest for a few minutes. And where I did that, was a big, open, clean area with elephant statues that the kids were playing on, and that people were photographing with their phones. Once again, I was pleasantly surprised.

TZ:  How were the elephants housed?

SP:  It was afternoon. I fully expected to walk a little further around and find the elephants outside in open areas. The weather was cold, but no colder on this afternoon than it is during winter nights in Hwange – although it had snowed in some suburbs of Beijing two nights before (which, by the way, was absolutely stunning for tourists like me). It wasn’t raining on this afternoon either. But the masses of people were headed into a building, and I followed.

In short, it was utterly disgraceful.

In front of me, there were people lined up, 4 and 5 deep, against dirty glass panelling, all bobbing their heads around, all trying to see something. I couldn’t see anything at all except for a whole lot of their reflections in the dirty glass. It’s pretty difficult to miss something the size of an elephant, and I began to think that I must be in the wrong place. But the sign outside had clearly said Elephant (in English) and so I patiently waited my turn and eventually managed to be standing directly in front of the window barrier. Behind that filthy glass were vertical iron, wooden and concrete poles of varying sizes, with only relatively small gaps between each. To my shock – and horror – there was actually a great, huge, adult male African elephant in there, as far away from the people as he could get – which wasn’t very far. For an adult male elephant, it was an unbelievably tiny cell. He could walk no more than a couple of steps in that concrete prison. And it was unclean to boot. His food was some dry, unappetising-looking, hay. He wasn’t chained, but there was a chain around one of the poles of his cage. Taking photographs was really difficult given the dirty glass, all of the many reflections in that glass, and all of the bars. I had absolutely no desire to stay for too long.

When you stumble upon an English-speaking Chinese person – which doesn’t happen nearly as often as you might expect – they are typically very friendly and helpful. I’d lost my camera the day before (never to be seen again), and by now had used up my remaining phone battery too. One young woman took a 30 second video of mother and calf, which she later kindly emailed to me.

TZ:  You went to the zoo twice?

SP:  I hadn’t been prepared for what I was seeing, and although I stayed until the zoo closed, I needed more photographic evidence. So, rather than visit a market or a temple, as I’d planned to do, I better prepared myself and forced myself to go back to the zoo again the next morning. I was absolutely sickened by the exact same environment that next day, and it certainly didn’t look like anything at all had been cleaned up overnight either. It was, in one word, HORRIFIC to be back there.

There’s one video here for your readers to view. There are another 13 different ones on my ElephantDawn facebook page – plus another one that is all 14 videos spliced together. I urge people to copy them, share them widely, and let the relevant world authorities know that this surely is NOT an appropriate and acceptable destination for elephants. There are Action Items that concerned people can take, within the numerous posts on my ElephantDawn page.

TZ:  Do you believe that any of the 3 African elephants you saw came from Zimbabwe?

SP:  No, I don’t believe they did, in this case. Unlike humans, an adult female elephant only gets breasts when she’s pregnant for the first time, and this adult female certainly has breasts. And she was suckling this approx. 2.5 year old calf on the first day that I saw them (when they were together in the one cage – although the next day, they were separated from each other, and were then in 2 different cages, which was clearly distressing for the baby – as per one of the videos that I recorded). Also, this calf would have been too young, at the time that Zimbabwe was last capturing, to have survived without very specialised assistance. So, I came to the conclusion that it was likely that the adult male and adult female were intentionally mated at the zoo. Where they came from originally though, I don’t know, but they’ve clearly been in zoo environments for some time. What I do fear is that perhaps there are new outside areas being built at Beijing zoo (as per another video), to house some future ‘new’ Zimbabwean calves – although I certainly hope this is not the case.

TZ:  Why was the mother and calf separated into different pens on your second day at the zoo?

SP:  I imagine this was done purely for the benefit of the visiting public. Instead of having masses of people crowded around just 2 concrete cells containing African elephants, by separating mother and calf, they at least now had 3 concrete cells for the public to spread themselves amongst – which still made the experience for the public ridiculously over-crowded with people regardless. What the zoo staff actually achieved by separating them was clear and obvious concern from the majority of the public; concerned that the baby was pining to be with its mother. At one point, the baby was actually on his back feet, looking like he was somehow hoping to get out of that damn cage, however he could.

TZ:  Do you think your video evidence will influence the Zimbabwe authorities to rethink their elephant capture policies?

SP:  Would-be tourists and elephant-lovers around the world are still waiting (now impatiently) for feedback from President Mnangagwa and Hon. Oppah Muchinguri (current Environment Minister), after I delivered a Care2 Petition to them, and also to the National Parks’ Director General, with more than 287,000 signatures on it opposing Zimbabwe’s elephant capture for zoos policy. That petition was delivered more than 2 months ago, and still the Zimbabwean officials remain quiet. Whether these zoo videos will help or not remains to be seen. But you have to care, don’t you, for it to make a difference. And I’m still not 100% convinced, despite new talk, that the new hierarchy really do care enough to act ethically. And wildlife has always been at the bottom of the barrel in Zimbabwe, even though it’s tourism that will be key in helping the economy rebound. Of course I hope I’m wrong and that they’re finally seeing the light. It’s sure taken enough time and effort and sacrifice, on the part of numerous people, to help this along.

TZ:  You mentioned still being unwell. Is anything improving for you health-wise?

SP:  It’s one time you don’t want to be quite so ‘unique’! Since leaving Zimbabwe and the Presidential Elephants, I’ve developed an incredibly rare autoimmune connective tissue disorder called Scleredema (as opposed to Scleroderma). To make matters worse, I have a systemic form of it, which is even rarer still. Specialists don’t know how best to treat me, to at least attempt to control the endless symptoms, and the progression throughout my body. It’s trial and error. Nobody can tell me what’s going to happen, and how quickly. All I know is that I struggled more by the end of this short China trip, than I did 6 months ago when I returned to Africa for 6 weeks, so it’s obviously progressed considerably since then. It’s all about debilitating and chronic pain and fatigue, skin and tissue changes/thickening, loss of movement and loss of some tissue, together with organ damage and changes. With the soothing Pacific Ocean around me now, I’ve come to accept that my health is likely to keep worsening.

TZ:  Did taking the zoo videos add stress to your trip? Have they got you in trouble?

SP:  As readers of Elephant Dawn will already know, for at least a decade of my 13 years in Zimbabwe with elephants, I was constantly finding myself in some sort of (made-up) ‘trouble’ – always thanks to the real trouble-makers themselves. ‘Trouble’ no longer fazes me. Let’s just say that I won’t be trying to visit China again anytime soon (Facebook tells me that some of my videos are “popular in Beijing” – which is both good, and bad for me) – and, as always, I trust that it all helps to make a difference.

You will find more video of the elephant conditions at Beijing Zoo on Sharon Pincott’s Facebook page, www.facebook.com/ElephantDawn. She can be contacted via the Contact tab on www.SharonPincott.com.