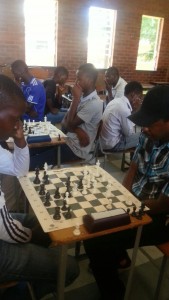 The under 13 girls category was won by Hazel Refelio Mudodo of Kwenda high school in Mashonaland East Province getting the gold medal though she was tied with Makanaka Chiwara of Chinhoyi High school on 7.5 points out of 8 games played.The two drew their game and Refilo had a superior butcholtz over her counterpart. The Women Candidate Masters beat all their opponents in the field and had to settle for a draw in their hard-fought game which could go either way.

WCM Chiwara then won a silver medal in this age group followed by Daisy Zhou of Mbizo high school in Kwekwe, of the Midlands Provincehsame age group.Maizivei Eniah of Masvingo and Patience Ndowa of Mash East came fourth and fifth respectively in this category with 5 points each.Chelsea Chitambo of Harare finished with 4/8 games and was tied on the seventh position.In the under 13 boys category, Magama Jimmy of Mashonaland West won a gold medal with 6.5 points followed by Haripo Tadiwa of Manicaland with 6 points whom he defeated in the final round to claim the top spot in this age group.Chikonyora Munashe of Mashonaland East came third winning a bronze medal.Marata Zvinavashe of Mashonaland Central came fourth while Sachika Luckman of Mash West came fifth in this category. Edith Mutyambiri won a gold medal in the under 14 girls category, the Mash East girl finished with 7/8 followed by Ashley Mutasa of Mash West with 6.5 points while Ropafadzo Mandizha of Mash Central, Chipindura High school came third winning a bronze medal for this section with 6 points.Nakai Mahachi of Harare came fourth with 5 points and Shumba Shallom came fifth with five points as well.The boys category of the under 14 was won by Matthew Mhlanga of Harare, St. Georges high school.

He finished with 6.5 points out of the 8 games played. He drew his last game while his contender Tafadzwa Butete of Midlands lost to Rufarao Chikaka of Prince Edward , Harare in the final round to give Matthew a gold medal. Butete, however, managed to come second in this category. In the under 15 girls category Panashe Zimbili of Chipindura high school, Mash Central came first with 7/8 points, while Chipangura Tadiwa again of Mash Central came second with 6/8 points so as Audrey Mpala of Mat North coming third on buchotlz winning gold, silver and bronze medals respectively. Ndlovu Tawana of Mat South came fourth with 5 points and Monrine Mavhengere of Midlands finished tied on five points while fifth.

Theresa Mapfumo of Mash East came 6th but tied on the fourth position and sixth on bucholtz. In the under 15 boys category James Chigariro won a gold medal with 7.5 points while Kelvin Moyo of Bulawayo came second with 5.5 points, Raymond Nyazenga of Mash East, Brenton Musanyi of Midlands and Kefas Tawanda f Mash West were all tied on 5.5 points and they were all placed from second to fifth place according to their bucholtz. Munashe Zambuko of Harare finished on 6th position with 5 points. Sibanda Bathabile of Mat South won a gold medal in the under 16 girls category and she was the only medallist from her Province.She had 6 /8 points while Laika Kalumbu of Zengeza 1 High school, Harare came second with 5.5 points.

In third place was Samukeliso Ndebele of Mat North Province again with 5.5 points. Matigore Promise of Manicaland was fourth with 5/8 points. An average of twenty participants per age group took part in each province fielding two players per age group. In the under 16 boys category, Meki Norest of Mash East came first with 6 points he won a gold medal, though he was tied by Swibineyi Mazhambe of Mash West who came second on bucholtz. Makomborero Graramukanwa of  Highfield 2 high school, Harare came third winning a bronze medal in the process.

He had 5.5 points. Moyo Bradley of Mat South and Moyo Thamsanqa of Bulawayo finished with five points and came fourth and fifth respectively. In the under 17 girls category Kamondo Loveness of Mashonaland West came first with 6.5 points winning a gold medal followed by Praise Sithole of Zengeza 1 High school, Harare who won silver with 6 points. Irene Bene of Manicaland came third with 6 points again and won a bronze medal in this category.Thembelihle Ndlovu of Mat North came fourth with five points while Kajese Anotida of Mash Central came fifth with five points. Meanwhile, in the boys under 17 category Mujaji Simon won a gold medal with 6.5 points.there was a three-way tie-break and he had a superior butcholtz after all the three players finished with 6.5 points.

Moyo Blessing of Bulawayo and Ryan Mafusire of Harare High school, Harare came third on bucholtz and got a bronze medal.Keith Mhizha of Mash East and Caleb Mpofu of Midlands came fourth and fifth respectively in the under 17 boys category. Sandisiwe Sibanda of Mate Secondary school won the under 18 girls category with a perfect score winning all her 8 games. The Mat North girl is becoming a force to reckon with in Mat North as she is becoming one of the best players in the country.She has a lot of potentials to be one of the best ladies in chess. Ropafadzo Dube of Midlands came second with 6.5 points, while Isabel Masawi of Harare came third in this category.

The girls won gold, silver and bronze medals respectively.Marlyn Zivanomoyo of Masvingo came fourth with 5 points , while Whande Ruwadzano of Mash West came fifth with 4.5 points in this category. There was another clean sweep in the under 18 boys category, Taurai Muzhingi of Mash West won all his games defeating the tourney favourite Farai Hamandishe of Harare who eventually came tied second third on bucholtz, Mafu Mulungisi of Bulawayo came second and won a silver medal.Kudakwashe Zimbowa of Harare came fourth, while Madzvamuse Mclean of Mash Central came fifth in this star-studded field.

Amini Audrey won the under 20 girls category with 7/8 points followed by Ndou Ttatenda of Mash West again with 6/8 pointsDaphine Rutizhe of Masvingo came third in this girls category winning a bronze medal.Hazel Granewako of Midlands came fourth while Tiny Nyatsambo of Harare came fifth with five points. In the under 20 boys category, Kudakwashe Jokonya of Harare won a gold medal with 7.5 points. in second place was another boy from Harare Acious Peisa of Mufakose 2 High School with 7 points. Tafara Gore of Midlands came third with 6 points while Ncube Confidence of Bulawayo came fourth. Charumbidzwa Osbert of Mash West came fifth in this category.

The chess fiesta in Bulawayo was of a good standard. FA Chimbamu was the Chief Arbiter at this tournament and the running of the tourney was very commendable with FA Blessing Jemani, Fa-elect Moses Mutipforo, FA-Elect Brighton Duburo taking part in this tourney and a bar was raised in the running of a scholars chess championships. This was a first and quite commendable. This should continue next year in Masvingo. The chess fraternity lost a chess coach of repute Samuel Tendai Midzi who was a teacher at Chipindura high school, also a former Prince Edward School old boy. He was laid to rest in Domboshawa at his home village.