LONDON (REUTERS) - British foreign minister Boris Johnson will meet his Zimbabwean counterpart Sibusiso Moyo and ministers from neighboring African states for talks on Friday expected to include Harare's possible readmittance to the Commonwealth. 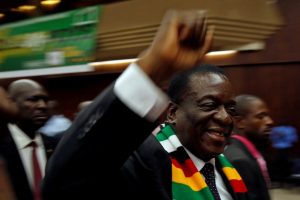 Zimbabwe left the group in 2003 after former president Robert Mugabe was criticized over disputed elections and violent seizures of white-owned farms.

Friday’s talks will take place on the sidelines of the Commonwealth Heads of Government Meeting being held in London.

President Emmerson Mnangagwa, who took over when Mugabe quit after nearly four decades in power following a de facto military coup last November, has said he wants Zimbabwe to rejoin the organization of 53 mostly former territories of the British Empire.

Johnson has previously said Zimbabwe’s Commonwealth readmittance would be a “fine and noble aspiration” for both parties, but that it must hold free and fair election first and also prove it meets the organization’s standards on the rule of law, democracy and human rights.

Speaking earlier this week, he praised the country’s progress under Mnangagwa but said there was still much to do.