New guidelines for Commonwealth election observation have been agreed and released at the Commonwealth Heads of Government Meeting (CHOGM) today - the first such update in 27 years. 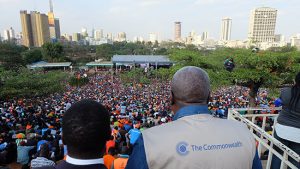 In that time, the Commonwealth has observed 137 elections in 38 countries. Commonwealth Secretary-General Patricia Scotland said: “Since 1991, there have been many developments in approaches to election observation and in the conduct of elections, notably with regard to the use of information and communication technology for the management of elections, women’s political participation and new media.

“So it is timely for there to be thorough reconsideration and revision of the guidelines. This is the first time in a generation that Commonwealth members have collectively re-examined and refreshed this important aspect of our work.”

The guidelines adopt best practice, as also reflected in the Declaration of Principles on International Election Observation, and will ensure the on-going integrity, value and impact of Commonwealth observer missions as they continue to support the strengthening of electoral democracy and the political rights of Commonwealth citizens.

When a Commonwealth Observer Group (COG) is conducting its analysis, and in making their overall assessment, it will take account factors such as:

Former Bahamas Prime Minster Hubert Ingraham chaired the High Level Election Observer Review Group that met at Marlborough House in London in February to review the  guidelines for Commonwealth Observer Groups, that were adopted by Commonwealth Heads of Government in 1991.

He said: “Election observations are a core activity for the Commonwealth, integral to its work in advancing democratic values and principles in member countries”

The Rt Hon Sir Anand Satyanand, former governor-general of New Zealand, who was on the review group, said: “It’s good that these observation processes are every so often reviewed and the method of working re engineered and expressed in a way that is relevant to the present”