Honestly, I thoroughly enjoy these documentaries and stories (I am not even sure how many times I have read ‘The Struggle for Zimbabwe’ by David Martin and Phyllis Johnson) as they carry a very crucial and integral part of our country’s history, that should always be cherished. The people of Zimbabwe should know where they 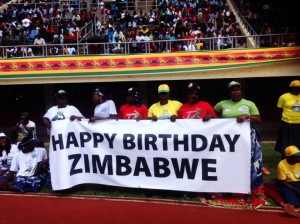 Honestly, I thoroughly enjoy these documentaries and stories (I am not even sure how many times I have read ‘The Struggle for Zimbabwe’ by David Martin and Phyllis Johnson) as they carry a very crucial and integral part of our country’s history, that should always be cherished.

The people of Zimbabwe should know where they came from, what happened along the way, and where they intend to go.

I strongly believe that a nation that does not appreciate and understand its own history, can not genuinely and seriously map out its future – as it is bound to repeat past mistakes, and doomed to fail dismally, and be lost in the torrents of the world.

That is an undeniable fact!

However, a nation’s history is not limited to one period or event, but encompasses all aspects of its past.

Nothing from a country’s history should ever be, either exaggerated, nor denied or trivialized – depending on how those in leadership regard such an episode.

Nevertheless, such is the dilemma that Zimbabwe unfortunately finds itself trapped, as our history is dependant on the dictates of those in power.

History is not relative, but is a fact – that can neither be denied, altered or exaggerated.

If ever history is tampered with, then it immediately ceases to be history.

The definition of history is complex, but the most appropriate one would be: the total accumulation of past events, especially relating to human affairs or to the accumulation of developments connected with a particular nation, person, thing, etc (Reader’s Digest Oxford Complete Wordfinder).

What I particularly love about this definition is the inclusion of words such as: TOTAL, and ACCUMULATION – which point to the fact that a nation’s history should include EVERY aspect of  its past.

Therefore, any nation that chooses to deny, or trivilise any part of its history, is only fooling itself, and is doomed to repeat it – if not, on a grander stage.

This takes us to the issue of Gukurahundi – the 1980s heinous massacre of tens of thousands of innocent men, women, and children in the Midlands and Matebeleland provinces by the ZANU PF regime.

This very gruesome part in Zimbabwe’s history has been shamefully ignored by the leadership – who were part and parcel of the genocide – and has, at best, been trivialized to mere ‘disturbances’ and ‘moment of madness’.

The slaughter of over 30,000 innocent men, women, and children can never – by any stretch of the imagination – be described as ‘disturbances’ or ‘moment of madness’, especially when the number of people who were so brutally and mercilessly killed arguably surpasses that of those killed during the liberation struggle.

Thus, if the liberation struggle, and the related atrocities, are an integral part of our nation’s history – as they should be – then, Gukurahundi deserves equal footing.

Similarly, there needs to be documentaries, movies, stories, and books produced that fully cover the issue of Gukurahundi – just as much as we witness so much on the Chimurenga.

The people of Zimbabwe are subjected to numerous accounts of the liberation struggle in the state media – coupled by interviews with victims and survivors of such atrocities as Nyadzonia, Chimoio, and Tembwe – and, we also need the same with Gukurahundi, as some of its victims and survivors are still alive.

However, the ZANU PF regime has tried its best to whitewash this period of our history by simply relegating it to the National Peace and Reconciliation Commission (NPRC), and some fuzzy future meeting with chiefs in the Midlands and Matebeleland provinces.

As much as we want peace and reconciliation in our country, however, this should not be synonymous with denying a nation’s past.

Actually, the best way to achieve any peace and reconciliation is through open acknowledgement of our total past – both good and bad.

The continued denial and trivializing of a very sensitive part of our history only leads to further and deeper resentment and anger – coupled with the desire for retribution – on the part of the victims.

The ZANU PF regime has never relegated the Chimurenga and colonialism to the corridors of the NPRC, whilst casting a blackout on this aspect of our history.

In fact, the ZANU PF regime has been at pains trying to bury Gukurahundi by such absurd statements as, ‘letting bygones be bygones’.

How would they feel if former White Rhodesians were to say that the Zimbabwean regime should stop talking about the Chimurenga and colonial days and ‘let bygones be bygones’, as this is only ‘opening old wounds’?

What if there were statements by former White Rhodesians to the effect that, ‘colonialism was just a moment of madness’, and that the Nyadzonia, Chimoio, and Tembwe atrocities were mere ‘disturbances’, and should be forgotten?

Would we ever hear the end of the anger and rebuke from these ‘operation restore legacy’ guys?

Nonetheless, that is exactly what the ZANU PF regime has been treating a very crucial part of Zimbabwe’s history by denying or trivializing Gukurahundi.

This attitude – inspired by a narrow and selfish desire for self-preservation by those in power – is a ticking time-bomb, which will lead to future tribal conflict in this country.

As much as ZANU PF has never been known for being foresighted, and visionary, they need to realize that the only way to bring true peace and reconciliation in this country is through acknowledging our total history.

The Germans, as difficult as it was, acknowledged their holocaust against the Jews history, and this has tremendously helped in the healing between these two societies.

This has also ensured that bold measures were put in place to prevent the reemergence of Nazi-style political parties in that country, so as to prevent another holocaust.

However, ZANU PF’s myopic policies of expediency in order to save their own skins – as they were the perpetrators of the Gukurahundi genocide – may seem good for the individuals involved, but will inevitably lead to a catastrophe in this country – which could lead to the deaths of even more tens of thousands of innocent men, women, and children due to retributory tribal conflict.

All the preaching of forgiveness, peace and reconciliation will never work, and has never worked, without proper, honest and sincere acknowledgement,apology and accountability by those who perpetrated this genocide.

The first stage in this healing process is by giving Gukurahundi its proper place in the country’s history.

The people of Zimbabwe need to hear the complete and unadulterated story of this very disturbing and heinous part of our past – in a similar manner as to how the Chimurenga and colonialism is being treated.

° Tendai Ruben Mbofana is a social justice activist, writer, author, and speaker. He is the Programmes Director with the Zimbabwe Network for Social Justice (ZimJustice). Please feel free to call/WhatsApp: +263782283975, or email: [email protected]. Pleas also ‘Like’ the ‘ZimJustice’ page on Facebook.