HARARE, Zimbabwe (AP) — Celebrating Independence Day for the first time without Robert Mugabe as leader since 1980 felt like a second emancipation for some Zimbabweans on Wednesday. 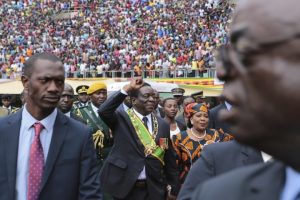 Zimbabwe’s President Emmerson Mnangagwa, center, greets the crowd upon his arrival at the National Sports Staduim in Harare, Wednesday, April, 18, 2018, to celebrate the country’s 38th anniversary of Independence. Thousands of people gathered for the event which was for the first time without Robert Mugabe as leader since 1980. (AP Photo/Tsvangirayi Mukwazhi)

For others, not quite.

The southern African nation still faces persistent economic problems including cash shortages and high unemployment. Major public hospitals have been shut down after the government fired more than 16,000 nurses for striking against low salaries and poor working conditions.

As the first post-Mugabe elections approach in the months ahead, some found hope. Others expressed relief that for the first time since the end of white minority rule in 1980, Independence Day was free from Mugabe’s often vitriolic speech against Western rivals and local opposition.

“Besides celebrating independence I am also celebrating a new era. We are seeing change,” 32-year-old John Kufa told The Associated Press outside the main stadium in the capital, Harare.

As music blared and military performers entertained the crowd, vendors circulated with messages of change: campaign slogans for President Emmerson Mnangagwa, who took over in November after a military intervention led Mugabe to resign.

Mnangagwa, a longtime Mugabe ally, has promised reforms and taken steps to re-engage the opposition and the West.

Once-banned election observers from the United States and the European Union have been invited to the elections scheduled for July “to be a part of this new chapter in Zimbabwean openness, democracy and freedom,” Mnangagwa said in a recent Facebook post. A free and fair election has been cited as a deciding factor in the potential easing of sanctions.

The crowd cheered when opposition leader Nelson Chamisa walked into the stadium. The opposition had boycotted independence celebrations under Mugabe, saying they had been turned into a ruling party affair.

In his speech, Mnangagwa again pledged to hold “free, fair and credible” elections and tackle the country’s deep economic problems.

“Let us shun hate speech,” he added. “As leaders, let us embrace the spirit of dialogue.”

Mnangagwa also has said he wants to return to the Commonwealth, the club of mostly former British colonies, after Mugabe pulled out in 2003 over allegations of human rights abuses. Former colonial master Britain has invited Zimbabwe as an observer to this week’s Commonwealth Heads of Government Meeting.

The new president also has repeatedly declared the once-prosperous Zimbabwe “open for business” and this week dispatched a ministerial team to the U.S. to lure investors after changing an indigenization law that forced foreign investors to cede majority shareholding to locals.

“This Independence Day marks a new chapter for Zimbabwe,” said Alexander Rusero, a political analyst based in Harare. “Mnangagwa has already set the tone by trying to reach out. Unlike Mugabe, who used the day to create more enemies, Mnangagwa is likely to use the day to make more friends.”

The day remained low-key, however, as many people went about their business.

“I am kind of celebrating and I am kind of not,” said 28-year-old hairdresser, Esther Tehwe, as the lingering economic problems made her doubt the “mantra of a new era.”

Street vendor Grey Kusona said there are still no jobs, no food and no working hospitals, even with Mugabe gone.

“It is like changing the driver of the bus but the bus remains the same.”