People have always been drawn by beauty. We have only to look at the ancient temples of Cambodia or Mexico, the Parthenon of Greece, the Colosseum of Rome or the citadel of Great Zimbabwe.  Beauty attracts the eye – and the spirit.  A football game is made up of 79 minutes of manoeuvring and one minute – or even one second - of glory. The goal is replayed on the TV over and over from different angles. 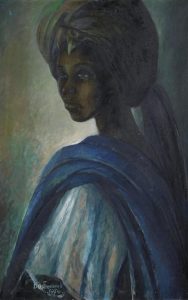 Beauty takes many forms and this 1974 painting by the late Nigerian artist Ben Enwonwu of an Ife princess is considered a masterpiece.  It excites the heart and broadens the mind.  It asks many questions; about society, about relationships, about womanhood, about God.  It is indeed a masterpiece!  But God also has his masterpieces and they are wonderfully varied.

Take, for instance, the life of John Bradburne of Mutemwa – a settlement for people living with leprosy in Zimbabwe.  In his time many considered him an eccentric, crazy, a drop out.  Others knew him as a delight, as kind and totally dedicated to God and his most abandoned people.

Reading his life[1] I am struck by the echoes of the gospel. John was heroic during World War II and at the onset of peace he searched – for twenty-four years – for where “I have to be”.  His search ended in Mutemwa in 1969 and for the next ten years he lived, first a honeymoon, echoing Jesus’ experience as told, for instance, in the first chapters of Mark, then, like Jesus, incomprehension, rejection and execution. At his graveside in 1979, Archbishop Chakaipa actually said, “John reminds us so much of Jesus.”

John was one of God’s masterpieces.  But we need to remind ourselves that we are all one of God’s “works in progress.” He is the “master craftsman” (Proverbs 8:30) and he makes many masterpieces – many of whom we meet in our life without knowing it.  At Pentecost the Spirit came in tongues of fire; “these separated and came to rest of the head of each of them”. For each one the fire is different. But each of us is a masterpiece in the making.