As the World commemorates World Press Freedom Day, Crisis in Zimbabwe Coalition implores the “new dispensation” to honour its obligation to respect and uphold freedom of the press. 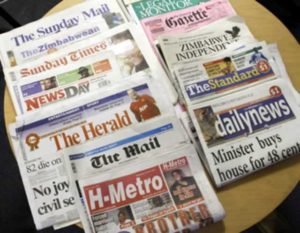 On this important day, which is being commemorated under the theme, “Keeping Power in Check: Media Justice and the Rule of Law”, CiZC reiterates that freedom of the press is a fundamental attribute of a democratic and developed state.

In line with our long held view, we also challenge the government to FREE THE AIRWAVES and ensure media plurality as a way of promoting divergent views. This will also ensure that Zimbabwean citizens have improved access to information and can be able to make well informed decisions based on that information.

Licensing of community radio stations and newspapers is also critical and we take with great exception developments of the past when radio and television licenses were being issued out in a partisan manner with loyalists of the regime benefiting.

In commemorating World Press Freedom Day, CiZC challenges the government and other responsible authorities to ensure protection of media practitioners in the course of their duties especially as the country heads towards the 2018 watershed elections.

It has to be noted that Zimbabwe has a history of persecution of journalists especially from the private media and this unfortunate trend must come to an end if the commitment by the “new dispensation” to uphold the constitution is anything to go by.

The role of the media in ensuring that the upcoming elections are free, fair and credible cannot be overemphasized hence the need to promote a free and conducive working environment for the media.

CiZC challenges politicians to desist from making remarks that have the potential to foment hatred against the media.

Since the ushering in of the new dispensation in November 2017, the country has witnessed some unfortunate incidences of journalists being ill-treated with the most notable one being the March 24, 2018 incident when Zanu (PF) Manicaland Provincial Chairperson, Mike Madiro barred journalists from the private media from covering the party’s provincial coordinating meeting saying only State media journalists were allowed to cover the event.

Such an incident highlights the continuation of

On April 29, 2018 News Editor of The Daily News, Gift Phiri was arrested for taking photos of senior police officers briefing Zanu (PF) polling agents during the party’s primary elections and was later released after being made to pay a fine of $20.00.

As the world commemorates Press Freedom Day, CiZC would also like to highlight that the media plays a critical role in the fight against corruption hence the need for the government to ensure adequate protection of journalists while covering sensitive issues that unearth corruption by bigwigs.

Zimbabwe has witnessed incidences of journalists being victimized for exposing corrupt practices and we challenge the “new dispensation”, in line with their pledge to fight corruption, to ensure that journalists are protected from any form of victimization and are allowed to do their work without fear.

Freedom of the Press is important as it allows the media to meaningfully contribute to democracy and national development.