An influential American senator, Chris Coons, has accused President Mnangagwa of not ‘walking the talk’ to introduce promised democratic reforms to clear the way for free and fair elections due by August. 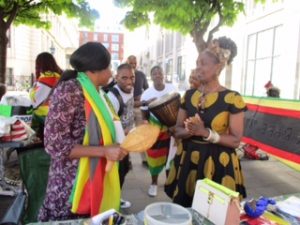 Coons was a member of a delegation of US senators – members of the Senate Foreign Relations Committee – which visited Zimbabwe early last month. Coons said that, in lengthy talks with the delegation, the president had pledged himself to promote democracy, free and fair elections, to protecting human rights and to returning to a rules-based open economy.

Coons’ comments come amid apparent differences between Mnangagwa and military commanders suggested by the chaotic Zanu PF preliminary elections – run by the military – which saw some the the President’s allies defeated.

Mnangagwa’s adviser Christopher Mutsvangwa has refused to accept his defeat in the primaries, complaining of an unconstitutional use of police as election returning agents, accusing them of ‘uninhibited rigging’. Mnangagwa backed him up with a statement that he didn’t want the police or any arm of the security establishment to help with any party function, which would amount to a flagrant violation of the law.

The Zimbabwe Independent goes so far as to say that the President and Vice-President General Chiwenga are openly fighting for ‘the heart and soul’ of Zanu PF (see: https://www.theindependent.co.zw/2018/05/04/mnangagwa-chiwenga-power-clashes-intensify/).

A Vigil activist just returned from Zimbabwe says the whole political process is diseased. The election campaign by all sides was largely driven by self interest to the detriment of the nation.

He told us that he had been offered some inducements by potential parliamentary candidates in exchange for financial support. ‘Zimbabwean politics is just a process of opening doors to facilitate corrupt self-interest’, he said. He added that talk about a free and fair election by the military backed regime was ‘mere talk’ in the absence of electoral reforms.

Thanks to those who came early to set up the Vigil by putting up the banners and looked after the front table throughout: Margaret Munenge, Patricia Masamba and Alice Majola.

FOR THE RECORD:  14 signed the register.