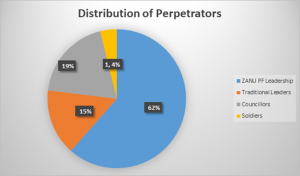 Heal Zimbabwe observed that intimidation remain the major human rights violation in local communities especially as the 2018 polls draw closer.  Intimidation continue leading the list of human rights violations recorded in this report with 19 cases compared to 37 cases in the previous report. Perpetrators use intimidation as a tool to coerce and silence opposition parties and ordinary community members from freely participating in political activities of their choice.  Intimidation takes the format of threats linked to withdrawal of food aid, reminder of past 2008 electoral violence and the new threat of violence by military personnel.  Victims in this regard known are opposition supporters and ordinary community members who end up complying with the demands of perpetrators due to fear of victimisation. Heal Zimbabwe notes that such malpractices are a direct violation of section 67 of the constitution which guarantees citizens the right to freely join or participate in political activities of their choice without being victimised. Heal Zimbabwe calls for peace and tolerance and notes that intimidation leads to a fearful society and hinder efforts towards peace, social cohesion and free participation in democratic processes.

2.1. Distribution of Violations by District.

The above illustration shows the distribution of recorded human rights violations across the districts. Heal Zimbabwe recorded human rights violations from 12 districts compared to 21 Districts in the previous report. The Districts are Mazowe, Muzarabani, Shamva, Mt Darwin, Mbire, Makoni, Buhera, Nyanga, Bikita, Kwekwe, Mvuma and Bulilima. Bikita District recorded the highest number of human rights cases, surpassing Makoni District which recorded the highest number of cases in the previous report. This is mainly because of the recently conducted MDC alliance rally at Nyika Growth Point and the ZANU PF Primary elections. Cases of human rights violations continue to surge as the nation approaches the 2018 elections.

2.2. Distribution of Violations by Province.

The chart above indicates the distribution of perpetrators responsible for committing the 25 recorded human rights violations across the 5 provinces. A total of 26 human rights perpetrators (23 males and 3 females) were recorded in this report. The perpetrators fall under four categories that are ZANU PF leadership, traditional leaders, Councillors and Soldiers.

In pursuit of the objectives of the HZT National Peace campaign, dubbed #13MilVoices4Peace, which seeks to raise public awareness on the need for peaceful coexistence, tolerance and participation in the upcoming 2018 elections, the organisation will continue to implore political parties, Traditional leaders and the generality of Zimbabweans to uphold peace and tolerance. The organization successfully engaged all perpetrators of human rights violations and emphasized the need for peace. In Muzarabani North ward 23, the organization facilitated for Member Chauya to report an assault case at Muzarabani police station after he was assaulted by Eddias Mangezi, a ZANU PF supporter.

In Nyanga North ward 2, the organization engaged Wilson Sauro after he disrupted a Ministry of Social welfare meeting and seized a 50kg of maize which was given to an opposition supporter. Sauro has since returned the maize and promised to uphold peace. In Mbire, the organization also engaged ZANU PF District chairperson, Robert Chawada who was forcing community members to submit serial numbers of voter registration slips. Chawada promised to stop the exercise and further highlighted that he was aware that it was indeed a criminal offence to collect serial numbers but was quick to point out that he was under immense pressure from the ZANU PF leadership from the Province to carry out the exercise.

In Mt Darwin ward 2, the organization contacted Bvumai Bhedhuru, secretary to Village head Kamedzero who was forcing community members to submit serial numbers of voter registration slips. The organization highlighted to Bhedhuru that it was a criminal offence to collect serial numbers. According to reports received from Heal Zimbabwe early warning committee members in Mt Darwin, Bhedhuru has since stopped the exercise and has apologized to committee members over his partisan conduct.

Heal Zimbabwe also engaged other implicated Traditional leaders and Councillors in areas such as Mbire, Bikita, Buhera, Nyanga, Mt Darwin and Muzarabani. Generally, the Village heads highlighted that most of the directives came from the local ZANU PF leadership within their areas. Heal Zimbabwe implored the traditional leaders to uphold their constitutional duty of not violating fundamental human rights and freedoms of any person as enshrined in Section 281 of the constitution. Heal Zimbabwe has also facilitated for affected community members to report their cases to the Zimbabwe Human Rights Commission (ZHRC).

Heal Zimbabwe through its National Peace campaign will continue to campaign aggressively on the need for citizens to uphold peace before, during and after the 2018 elections. The organization has sent all cases to the ZEC and ZHRC for redress. The organization will continue to monitor human rights violations especially in political hotspots areas.

Village head Lloyd Chikukwa on the 21st of April 2018 intimidated community members during a community meeting conducted in Chikukwa village. Chikukwa highlighted that every member should submit their serial numbers if they want to continue receiving food aid.

Village head George Kambudzi who also doubles as ZANU PF District Chairperson on the 30th of April 2018, assaulted Feira Moya for supporting Maxwell Kangosa a fellow ZANU PF aspiring Councillor for Muzarabani ward 17 at Kambudzi Primary School. Kambudzi highlighted that people who supported and voted for Maxwell Kangosa in the primary elections will be considered sell-outs and heavily beaten.

ZANU PF ward Chairperson, Tedious Mangezi on the 6th of May 2018 assaulted MDC-T aspiring Councillor Member Chauya in Bere village accusing him of being a “sell-out”. Chauya sustained injuries on the head. The matter was reported to the police but no arrests have been made.

On 21 April 2018, ZANU PF youth chairperson, Tapiwa Madzimbamuto intimidated community members during a ZANU PF meeting at Nyamukamani Business Centre. Madzimbamuto forced people at the meeting to submit serial numbers of voter registration slips and highlighted that those who failed to submit will be heavily beaten in the upcoming elections.

On 26 April 2018, Village head Chimusasa forced community members to make monetary donations of $1 for the purchase of a goat and groceries for a ZANU PF meeting that was conducted at Fombe shopping centre on 27 April 2018. Chimusasa further warned that those who failed to make the monetary donations will be struck off the food aid beneficiaries list.

Councillor Kandu Lawe from ZANU PF on the 29th of April 2018 threatened people who were manning Amaveni polling station where ZANU PF primaries were being conducted. Lawe threatened the polling agents with violence if they continued with the process and also accused them of tempering with ZANU PF cell registers.

ZANU PF District Chairperson only identified as Majoni and ZANU PF district youth chairperson Ronald Shuzhai on the 22nd of April 2018 intimidated community members during a ZANU PF meeting conducted at Chiwodza Business Centre. Shuzhai announced that he had compiled a list of names of people who refused to submit serial numbers of their voter registration slips and that he was going to  submit it to the ZANU PF provincial offices.

On 4 May 2018, ZANU PF aspiring Councillor Chipo Chipare moved around the ward threatening people with violence in the event that ZANU PF loses the 2018 elections. Chipare further warned people that if they participate in opposition party rallies, ZANU PF will unleash violence on them before the pending elections.

ZANU PF District Chairperson Raki Jaji on the 29th of April 2018 intimidated community members during a meeting conducted at Makotore ward centre. Jaji highlighted that opposition political parties will not be allowed to conduct rallies in the ward. Jaji further threatened to unleash violence on opposition supporters in the event that ZANU PF loses the 2018 elections.

Jonas Magara, a ZANU PF member on the 25th of April 2018 intimidated community members in Mupangaguta village. On the day in question, Magara moved around the ward collecting serial numbers highlighting that people who failed to submit their registration slips will not receive food aid.

Lilian Mutendi, a ZANU PF member and a soldier only identified as Mataga on the 28th of April 2018 assaulted Felix Mazhekete, the ZANU PF District Chairperson at Mandadzaka Business Centre. Mutendi and Mataga accused Felix Mazhekete of forcing people to vote for his preferred candidate in the ZANU PF primary elections.

On 4 May 2018, Headman Magcobafuthi announced during a ward meeting that people who fail to vote for ZANU PF in the 2018 elections will be assaulted. Magcobafuthi further warned that he will also deny food aid to people who attend opposition party meetings.