Zimbabwean National People's Party (NPP) leader Joice Mujuru has reportedly pledged to serve only one term if she is elected president in the upcoming elections. 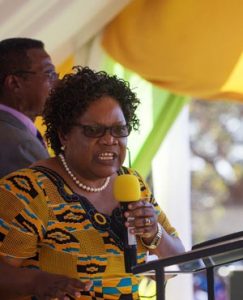 According to NewZimbabwe.com, Mujuru said this while addressing her supporters during a rally near Harare where she launched her party’s #JoiceIsMyChoice campaign.

Mujuru said that the current leadership had outstayed its competitors and had failed to achieve progress.

She said that the youth should be “given a chance to lead because they are leaders now not tomorrow”.

“Look now where the country is now; they (current leaders) have run out of ideas of how to take the country forward in the 21st century,” Joice Mujuru was quoted as saying.

Who will lead the alliance?

“If I win the forthcoming elections I will serve for one term (and then) hand over to someone young within the ranks to take the party to the next level. (But) he or she needs to be responsible with a credible record not those who think a political career is about being corrupt, abusing office and forgetting their responsibilities.”

This came as reports on Monday said that Mujuru was in talks with fired Movement for Democratic Change (MDC-T) vice president Thokozani Khuphe, to form an alliance ahead of the general elections.

Zimbabwe was set to go to the polls before the end of August.

According to NewsDay, a source said that both leaders were worried that their support base as individual parties was not sufficient to carry a majority vote.

“The leaders met during the women electoral convergence [summit] in Bulawayo and… agreed in principle that an alliance ahead of the polls would be critical, however, the sticking point is on who will lead the alliance,” the source was cited as saying.