The MDC joins the rest of the world in commemorating World Press Freedom Day under the theme “Keeping Power in Check: Media, Justice and The Rule of Law”. 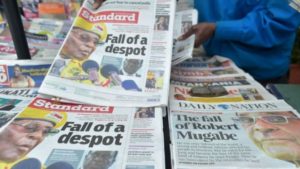 It is common knowledge that the media is the watchdog of the community hence its use or abuse can make or break a nation. Zimbabwe heads for an election this year, hence the role of the media will be crucial in the holding of free, fair and credible polls.

As the theme of this year’s commemorations suggests, there is need for the media to keep government power in check so that the sovereign will of the people is allowed to stand in the forthcoming plebiscite.

It is sad that despite the novel provisions in the Constitution demanding media diversity, Zimbabwe still has one national broadcaster 38 years after independence.

Zimbabwe continues to function without media reforms, five years after the consummation of the new Constitution. The airwaves remain closed to independent players as a way to thwart divergent views and plurality. The licensing of community radio stations and newspapers in the recent past has catered only for loyalists of the regime against the dictates of the Constitution and against international best practice.

As part of its legislative agenda, the incoming people’s government will ensure repressive acts are repealed while media laws are aligned to the country’s supreme laws. In the true spirit of the theme, we want in our time a media industry that is the true voice of the people; a media that keeps power in check and that furthers the sacred agenda of justice and the rule of law.

This day must be a day for sober reflection. Zimbabwe deserves better.

President Adv. Nelson Chamisa and the entire party leadership salutes the country’s press corps for its unstinting work under difficult conditions in promoting accountability and transparency, particularly in the dark and murky crevices of government operations.

Zimbabweans await a truly new dispensation where their rights are respected, where diversity, independence, impartiality and non-interference by government are the sacred cornerstones of our media policy.